*Please Note: in the following post I am not in any way criticising Max Loughan. He seems like a fine young man with some out there ideas. He's bright, creative and very imaginative. The focus of my ire is Disclose TV not Max, who I wish nothing but success, I hope he pursues his interest in physics hopefully, away from Disclose TV*

Meet Max Loughan, he's a bright, imaginative and extremely well-spoken 13-year-old boy, who just so happens to be something of an obsession for science denying, conspiracy-mongering website Disclose TV. In their latest article written by Lucas Magnuson about Max, Disclose declare that the teenager has discovered that CERN has destroyed the universe.


"Laughlin has a theory that CERN could have destroyed the universe and we actually live in a parallel universe that was the closest to it. Laughlin thinks that the Mandela Effect is the result of this and he has gone on to explain his theory in a video that is mind blowing when considering it comes from a kid...."

A bold claim indeed. Disclose extract this claim from Max's latest video which you can watch below.

In the video, Max uses many legitimate scientific terms, but does so in a way that makes absolutely no sense. He also throws in a dash of phrases such as "God=E=mc^2" and "the higher infinities" and "electrons move from animator to animator to animator." which ultimately sound good, but mean nothing. Unfortunately, there's a stratum of casual physics enthusiasts that find phrases like this delivered with enthusiasm and crucially, total confidence very convincing.  But bunkum delivered with charisma is still bunkum. And boy is this bunkum.


"The universe is so complex that if one stopped to take a look at what is actually happening people would give in to the marvelous beauty of it..."

I think Lucas needs to relay this to the whole of the scientific community, especially cosmologists. Just because Lucas swapped a bunsen burner for a bong at 14 doesn't mean the rest of us followed suit. He continues:


"There is proof of free energy, unified field of consciousness, superhuman ability, and alternate reality and more..."


"so much is mind boggling that no one would think that a kid would have any understanding of it all. However, one 13-year-old, Max Laughlin understands it all and can explain it in intricate detail to those who perhaps aren’t as clever. "


No Lucas, Max can elaborate on physics in such a way that absolute dunderheaded morons like you think they're having actual science told to them! But, I agree that you're less intelligent than him. That said, I've a head of lettuce that's been in the fridge way too long that I suspect may be more intelligent than Lucas.

Max speculates in his video that the Mandela Effect is a result of CERN scientists destroying the universe. Clumsy of them. Briefly, the Mandela effect is the idea that the reason we remember some things differently is because we somehow find ourselves in an alternative universe to the one we grew up in. Consequently, there are minor differences, such as in our original universe Nelson Mandela passed away in person whereas in this new universe he was freed by Bono. This is where the theory gets its name. Another example of the idea is that the popular kid's book series "The Berenstain Bears" was actually called "The Berenstein Bears" in our original universe. (note: you've no idea how hard it was for me to get that the right way around!)

The article goes on:


"The theories of Laughlin are amazing as are the explanations that he provides, at one point writing on a napkin as a way of explanation, in the video explaining to people much older than himself about infinite in confined space and alternate parallel universes."


There are a couple of problems with Max's theory.

Firstly, it's not a theory. Theories in science are well supported by research and evidence, a hypothesis only graduates to a theory after years, decades even of painstaking work. Theories must fit existing frames works of science and encompass and include known physical laws. Theories in physics must be formulated with a mathematical formalism. Sorry Max, this ain't a theory, it's wild speculation. That's not to say it's wrong though. The next problem does say that though.

I've discussed the nonsensical idea that the Large Hadron Collider could "destroy the universe" before, so I'm not going to get too caught up in it now. Suffice to say the maximum energy created by a particle collision in the LHC as of yet is 13 TeV, energies of collisions between high energy cosmic rays and particles in the uppers atmosphere can reach up to 10^8 TeV! Admittedly these higher energy collisions are fairly rare: one every century or so, but collisions many factors higher than that found at the LHC occur millions of times every second in every square kilometre of the upper atmosphere. Max, doesn't seem to understand this about the LHC, he also doesn't seem to understand that hundreds of experiments run at the LHC. When his father says "So this happened when CERN did their experiment?" Max agrees. It's fine of course that Max is a bit in the dark about the LHC, he's thirteen for Christ's sake. It's the fact that whoever publishes Max's videos are hailing him as a genius that bothers me for reasons I'll explain at the foot of the post.

As for that amazing drawing that lays out his theory, shockingly and spontaneously drawn on a napkin.... here it is. It looks like something a child would doodle on a napkin. Nothing more. 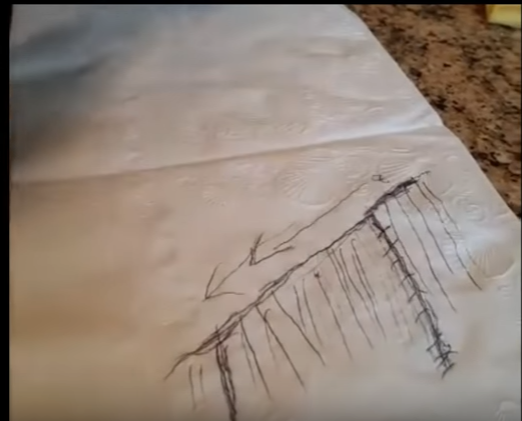 The various posts about Max on Disclose refer to him as a theoretical physicist, he isn't. He's a bright kid, he isn't a qualified physicist. They claim he has invented the free energy machine, a concept absolutely forbidden by the laws of thermodynamics and the conservation of energy. He hasn't. The authors at Disclose are setting Max up as a fraud. More worrying the boy's father in his videos claims he is a genius who ordinary people can't understand. I'm sorry, but many of us can at least understand that the reason Max isn't understood is he's spouting half-baked ideas and wrapping them in misused terminology. What happens when people start to realise this about Max?

The internet is an ugly place sometimes and Disclose, Lucas and Max's father are making him front and centre of a potential backlash when people realise this kid isn't what THEY are claiming he is. They are setting this kid up for a massive fall, in their own hubris and in Disclose's case support of a warped ideology designed at railing against "mainstream science".

He'll bare the brunt of this not them.

In my brief research for this post, I came across a video of some absolute nut claiming Max is a fraud. His reasoning for this is that only he can correctly identify information from alternate timelines. They are parading Max in front of people like this who will react with anger and jealousy. They are exposing him to skeptics and scientists who will expose and mock his "theories". Not all these skeptics, though correct in their criticism, will see the puppeteers behind the curtain. They'll direct their ire AT MAX. And the older he gets the less he will be treated with charity.

There's another consequence of all this. What happens when Max becomes enamoured with a certain level of attention and adulation? I was never hailed a genius at 13, but I image it's a heady brew. And damn addictive to boot. Max will begin to seek that kind of adulation all the time. He'll avoid the naysayers who hurt his ego and shed light on his veil of bullshit. He'll cultivate a band of loyal followers who hang off his every word because they're too thick to see through it. His claims and lies will become greater, and as voices rise against him, he'll learn to blame others when they expose his lies.

This is what you'll get. Another David Roundtree. Pontificating to a dwindling band of followers. Destined for obscurity. 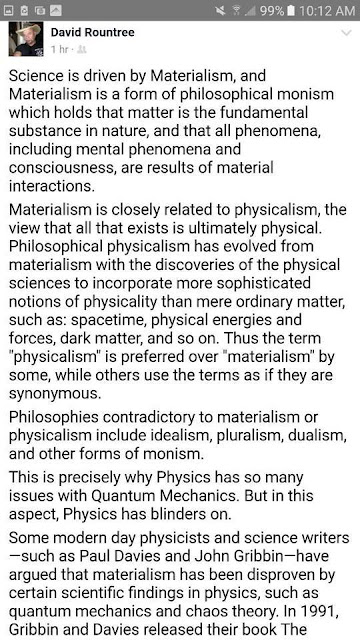 I'm a father. I know what it's like to be proud of your son. To want the world to see how amazing he is. I know Max's dad is proud of him too, and so he should be. He's amazing. Please if you somehow end up reading this tiny blog, end this nonsense, have him pursue his interest and passion for science in the right way. Calling him a theoretical physicist may result in him actually never achieving that title. If he grows up to believe he's earned it already, why would he work for it?
Don't encourage him to skip steps on the way up. The gaps will catch up.

Twelve-minute introduction The first thing that I think I should be clear about is  that I don't believe merely platforming a rapist mak...