I'm sure many of you are more than familiar with the format of Most Haunted if not the show itself. It would not be totally unfair to suggest the show is the trend setter in current ghost hunting TV, but it's also not unfair to point out the genre has left it behind. Really run the show behind the far more polished Ghost Adventures, and it does not fair well in comparison. Ghost Adventures strong stylistic elements and editing trickery are for the most point absent from Most Haunted, not something that particularly bothers me as I find such things style over (a complete lack of substance). One other thing that is abundantly clear about Most haunted in its current iteration is it doesn't take itself or its subject matter particularly seriously. This was starkly illustrated by a calling out session in the last series in which co-originator Karl Beatie asked the spirits of an Edwardian building if they wanted a crumpet. One can also point to the introduction of a rather disinterested dog, Watson, as a semi-regular team member (although I'm told they aren't the first ghost hunting show to do this). Watching Watson amble wander disinterested, bored aloof and ultimately detached around Abbey House Museum, I couldn't help but feel he had become a muse somewhat for me and the audience in general.

So why after such apathy would I even consider reviewing episode 2 of said series? Well, there's been something of a tabloid furore about the latest episode of Really's Most Haunted. Papers such as The Mirror, The Sun, The Mail and the Evening Telegraph have been reporting that this episode contains the most impressive evidence the team has ever collected. The reports all appeared today (21/04/17) the day of transmission. The Evening Telegraph tells us:

Fielding said: “To date this has to be the most ground-breaking footage we have ever recorded... But rather than giving us the answer we were looking for, it just gave us more questions...Was it the presence of the spirit of a long dead soul, a doppelganger, Stone Tape Replay or something else we are never supposed to understand?”Karl Beattie filmed the footage and said: “We’ve never seen anything like this before and we really don’t have an explanation for what we saw but the replay of the filming, clearly shows the vision in detail.“It’s a weird, weird place.”

Now, it doesn't take the most cynical of us to conclude this is a purposeful piece of propaganda aimed at propping up ratings for the second episode of the series. The stories may even be paid pieces provided by Really, though given the UK tabloids strong desire for paranormal fluff this isn't a sure thing. Obviously, this is a promo piece but as the MH crew are claiming something extraordinary, I decided to take a look.

Before looking at the episode in general which I'll do in my next post, let's look at the footage which has garnered so much attention from the tabloids and see if we can get to the bottom of it.

Above is the footage that the MH team are touting as the most impressive thing they've ever caught (video shared for the purpose of criticism and review obviously)  Bad Psychic's author Jon Donnis has an opinion on what the image is. In his review of the episode, Jon concludes this is team member Glen, who is wandering the location on his own. 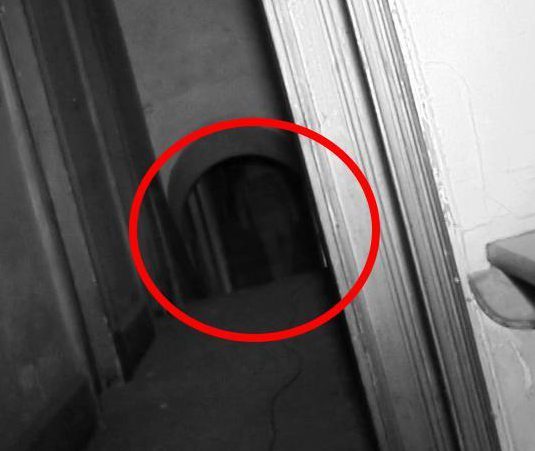 I actually don't think this is correct.

From the image on the left, it's clear to see the figure is somewhat translucent, especially the upper half where you can see through the stairs in front of it somewhat. I think it's a figure, but they aren't there in "real time". A clue to this is Stuart Torvil and Karl Beatie's terrible "surprised" acting. They don't seem at shaken, by seeing "something", nor do they describe what they've seen. This makes me feel it's not really there. Obviously, if this were a case of mistaken identity the person would be present.

In my opinion, this is a video overlay.

In the below video Viper paranormal explain how this is achieved.


Now, what the MH crew would need to achieve this is a stationary shot. It's vital that first and second shot line up. This is why the figure climbs the stairs in step and it's head vanishes at the archway. That's my biggest clue as to this being the source of this apparition.

Watch the first video again, note that Karl and Stuart put the camera down and are very careful to ensure that is stable, they actually spend some time adjusting the camera precisely. Why do they do this? In the rest of the episode, they just point and film. The cameras remain handheld. Why do they need a stable shot at this point? This seems especially silly as Karl immediately picks up the camera again as soon as the "apparition" has passed. They do it because they need a stable stationary shot for the overlay to work. Also notice, either Karl or Stu point at the lens, showing the other where the staircase appears to line up with the lens. As they are doing it, they say "the sound came from here." That doesn't make much sense. Unless their trying to inform the other where the "apparition" will appear.

I asked the man himself why he put the camera down and spent a moment fixing it. 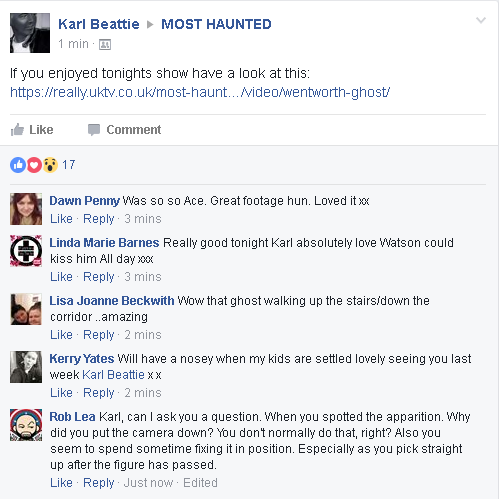 Sorry MH, but this "most impressive" evidence is abject, and quite amateur fakery.

I've decided to trot out the framework I started to develop in my recent review of Nick Groff's Paranormal Lockdown to review this episode of Really TV's Most Haunted in full next time. In that post I'll also let you know what Karl had to say with regard to the camera.