I've been thinking of an exciting new concept it's like totally original! I'll call myself the Nostalgia Skeptic and I'll just debunk things that are really old but keep getting dredged up by useless tabloid journalists  and dimwitted social media pages and groups. I'll even have a witty catchphrase. How about "I'm the Nostalgia Skeptic. I debunk it so you don't have to!"

What do you mean it's been done?

Anyway, The Mirror displayed it's utter determination to become a paranormal click-bait site and little more this week by resurrecting this piece of tosh, "Man possessed by ghost on CCTV"  which first started to be shared back in 2012. The footage was allegedly shot in a supermarket in Malaysia in 2011.  Of course, now a major British tabloid have picked up on this, other organisations such as Coast to Coast, have jumped on the bandwagon.

The footage dates back to 2011 and has been shared to death on paranormal social media. The big selling point of the video has always been the eerie "face" that appears in the reflection of the chiller at the end of the footage. Following this. some stock "mysteriously" falls off the shelving.

This moment is interesting to me for a completely different reason, it's the point where the fakery of the video becomes apparent. Watch the video again, this time watching nothing but the clock. You'll see that from the time the shadow moves across the chiller cabinet to the moment the stock hits the floor the clock freezes. 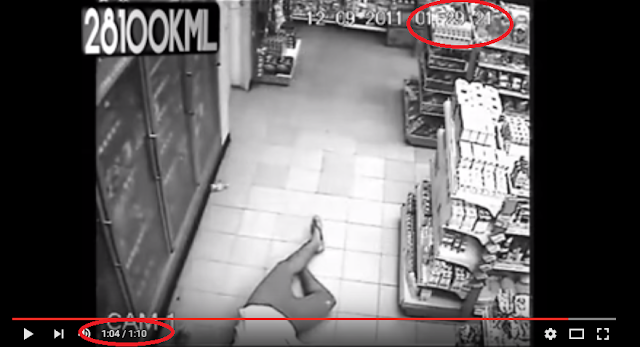 The three seconds of 01:29:22 clear evidence of alteration of the video. 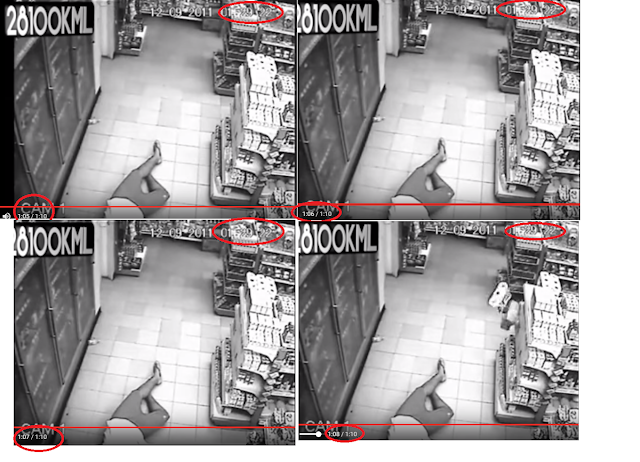 Also just before this point at 1.03 watch the "possessed" man's left foot. You'll see clear evidence of an edit as his foot jumps from one position to another. It's difficult to display this. Watch at 0.25 speed and focus on the foot you'll see a clear jump edit.

In my opinion, the image appearing in the chiller door is someone moving in the aisle facing the door. Whatever they do knocks the stock from the shelf.I think whoever tampered with the video removed this person but failed to remove their reflection. It could even be the reflection of our possessed man moving, I think it's actually the reflection of him sitting up. I think this video is another composite shot as we discussed here. A stationary shot and a shot in which the groceries fall.

We have to also ask is the whole incident faked? The behaviour of the man in question is certainly reminiscent of a temporal lobe epilepsy sufferer experiencing a seizure, especially the clawing at his clothes and the shaking of his head. Of course, I could be wrong and this could be staged. The position in which this all occurs is perfect to be covered by the camera, but the footage would be highly unlikely to be so widely circulated if it weren't. The man's final fall to the ground seems extremely staged. He clearly falls in such a way as to cause no pain. This fall also brings an end to the episode. Several commenters also suggest the man glances at the camera several times, although I didn't really see this myself.

There's no doubt this is fake, the question is did it originate as fakery or did someone come across the footage and edit it and why did no-one at the Mirror or any of the other outlets that have featured it notice the disparity in the two time codes. Oh I know.... they couldn't be bothered to look.
I'm Nostalgia Skeptic: I debunked it so they don't have to.... or something.
Posted by Robert Lea at 23:43