Social media is buzzing with news of a new paranormal investigation show. Now that might not seem that exciting to you, after all, television doesn't exactly have a shortage of such programmes.

"Enter Stephen Erkintalo, a paranormal investigator with an extreme edge....“Haunted Tours” is looking to go where other paranormal investigators have shied away from. To attract whatever lies on the other side, Erkintalo is going beyond just politely asking for a response. He is going the metaphorical bullhorn route by lying on train tracks, harboring a Ouija board covered with his own blood on his chest with a train oncoming.  Hopefully the spirits speak up before the conductor has a very bad and messy evening." 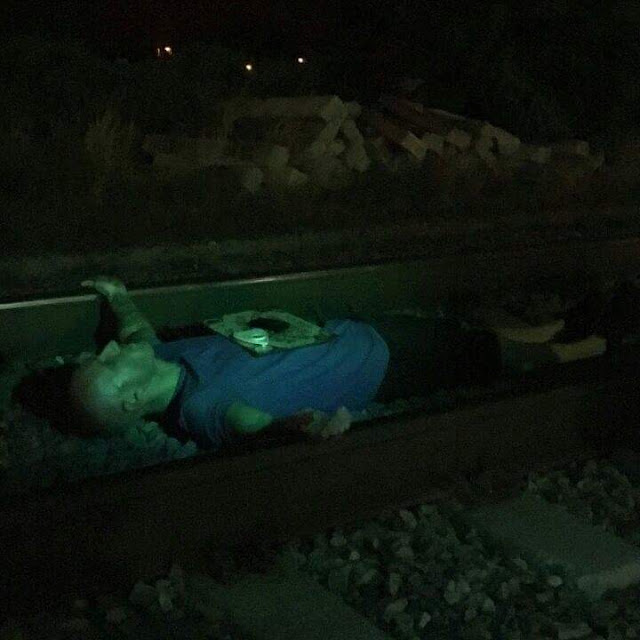 Clearly, Erkintalo lay down on train tracks with a Ouija board on his chest, that a train was coming is entirely doubtful. But regardless, this is clearly a very stupid act and deeply irresponsible to show on television. Especially when many "ghost hunting groups" and individuals clearly emmulate the investigative methods they see used by ghost hunters on television. And this isn't a one-off. In a Youtube video plugging the show, Erkintalo solicits requests on his facebook page for other dangerous and stupid acts to perform whilst investigating.


"Stephen Erkintalo is the most extreme investigator in the world and proves it with each episode of Haunted Tours. He breaks all the traditional rules of investigating by provoking the dark that resides within, pushing the limits far past what's already been done. Experimenting with the Ouija Board, contacting the dead through mirrors, and hanging upside down on a cross is only the beginning. Legitimately pushing the limits beyond what this field has done for the past 30 years. Investigators nowadays, they walk around with cameras asking questions and will repeat those questions until they get an answer or somewhat of an answer. They follow what they see on television while assuming everything else is breaking the unseen and unspoken "rules" which indicates, they're scared! What lies beyond this realm? Well, one thing is certain, watching a flashlight flicker, a manipulated EVP (electronic voice phenomena), or feeling cold air will never allow us to understand their realm. The Jalbert Brothers are bringing it to you in a new documentary style television show that puts you right in the action. Join us, join the Haunted Tours Crew as we speak to those who have already taken their last breath."


The general ethos of the show seems to be, that by performing dangerous, life threatening "stunts" (or appearing to at least) Erkintalo gets "closer to the dead", which is frankly moronic and obviously exists as an idea without a shred of evidence to support it. Like almost every other idea expressed by paranormal investigative television then. The danger is if other groups pick this up as a legitimate "investigative" method. There's already a stratum of ghost hunting as a hobby that is thrill seeking pure and simple.These thrill seekers don't just damage the reputation of legitimate paranormal investigators, they often damage the locations they investigate. Residents in Gettysburg recently raised the funds to protect Sachs Bridge, a historic local landmark, from irresponsible ghost hunters. This isn't an isolated incident, more cases can be found here and here.

Unfortunately, sometimes a heftier price is paid by thrill-seeking ghost hunters themselves. In August 2010 a 29-year-old ghost hunter was killed in Statesville, North Carolina. Christopher Kaiser was part of a group of twelve amateur ghost hunters investigating the site of an accident 119 years previous when he was hit by a train. Another investigator was severely injured after falling 30 feet from the tracks whilst avoiding the train that killed Kaiser. Given that fact, Erkintalo's escapades on train tracks aren't just deeply irresponsible, they're also deeply disrespectful to Kasier and his family.

In addition to this, the methods Erkintalo and his team seek to employ aren't investigative in any way. He seems to come from the Nick Groff school of investigation. i.e- lying down in a location and talking to himself constitutes investigating in some way. What we are seeing is the law of diminishing returns here. Erkintalo sees the lax investigative methods of Groff and his peers and seeks to emulate them, in the process dumbing them down, something I may not have believed possible had I not seen it with my own eyes. In turn, Groff took the methods of Ghost Adventures and watered them down.

What we have here is nesting dolls of diminishing intelligence and credibility.

I'd love to tell you more about Stephen Erkintalo and his investigative methods, but unfortunately, the internet doesn't seem to have heard of him or his "Superior Paranormal Investigations" team before filming of the show began in March. The only references I can find of Erkintalo as an investigator are his own proclamations of how innovative and groundbreaking he is. Maybe I can't find any references because as he claims below, he's "blacklisted" or could that be whitewashed?

The Superior Paranormal FB page has virtually no significant content on it barring a few videos shot on a mobile phone. Under the macho bullshit and posturing there's nothing to this guy. Well perhaps the willingness to do anything to get himself noticed.

There's one redeeming factor to all this. I suspect that "Haunted Tours" may never actually see the light of day.

On Dread Central the producers of the show Jalbert Brothers Studio claim the show will air in October on "Netflix, Hulu, and Amazon Prime". It's a claim repeated on the official website for the show too. This is an extremely dubious, whilst it could be true, these streaming services are bitter rivals and I'm not aware of any programmes or films that appear on two of them, never mind all three. I somehow doubt the Jalbert Brothers have the sway to negotiate out of exclusivity deals that some of the biggest entertainment brands in the world agree to. Someone correct me if I'm wrong. As with their investigator, the production company "Jalbert Brothers Studio" are fairly obscure. Their main work thus far seems to comprise of videos produced for Youtube and Vimeo and student films. Their biography boasts of working on the feature film Apple of My Eye starring Burt Reynolds and Amy Smart which was distributed by Sony Pictures this year.

One has to hope this show won't see the light of day, and if it does, it enjoys the relatively obscurity of those involved other projects to date. The last thing the paranormal scene needs is a show that encourages ghost hunters to act less responsibly than they already do.

After this post was published it was quickly discovered and read by Stephen Erkintalo. He responded with petty insults and anger as I expected, but despite this, I gave him the opportunity to comment on the potential harm that may befall ghost hunters seeking to emulate his activities. I also asked him to comment on the death of Christopher Kasier in 2010 after being hit by a train whilst ghost hunting.

This was his response:

Which I think speaks for itself.
Posted by Robert Lea at 22:01