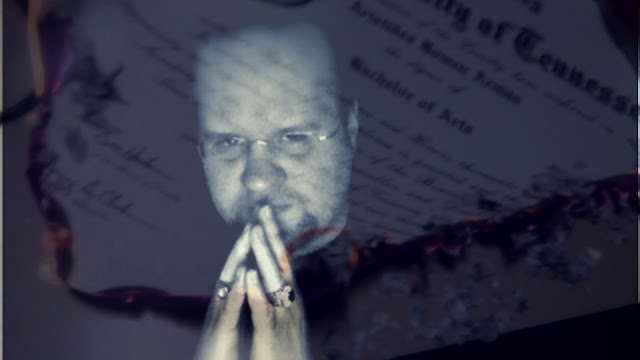 Bishop James Long, a frequent guest on ghost hunting television shows, first came to my attention way back in 2015. What struck me about Long, a self-professed 'demonologist', was his seeming preoccupation with money. It seems that Long has a new way of acquiring his followers' money... 'Honorary' ParanormaDegrees that aren't worth the paper they're printed on (1).

In an interview I reference in that article (2), Long refers to his experiences on Ghost Adventures as simply advertising that he couldn't afford to pay for. Even more shockingly, he complains about his annoyance when clients call on his services and cannot, or refuse to, pay for them.

Now it seems that Long has a new money-spinning scheme and it involves another complaint that I frequently have about the paranormal community, the obsession with meaningless titles and specialisations.

Long, who himself claims to be a 'demonologist' is selling what he describes as 'honorary' academic qualifications through an organisation he calls Paranormal Clergy Institute. As you may imagine, the qualifications that Long is offering seem far from credible and imply that he really doesn't have the faintest idea what he is doing.

What exactly is 'honorary' about Bishop Long's 'Honorary' Paranormal  Diplomas?

The first question that we have to ask ourselves about Long is "does he even know what an honorary degree or diploma is?"

An honorary degree is generally offered to a person of note by a school or educational organisation. It's normally given in recognition of some altruism of good deed or contributions to a specific field.

What is common amongst honorary degrees no matter from where they are offered is that they are not awarded on the basis of academic achievement. Also, honorary degrees, diplomas and doctorates are not generally exchanged for money, and on the rare instances they have been, the institutes involved generally end up having to ward off scandal.

That incredibly short description of honorary degrees gives us several points of contention upon which to question Long.

Firstly, and in my humble opinion, most importantly, Long is not awarding his 'honorary' diplomas for free. 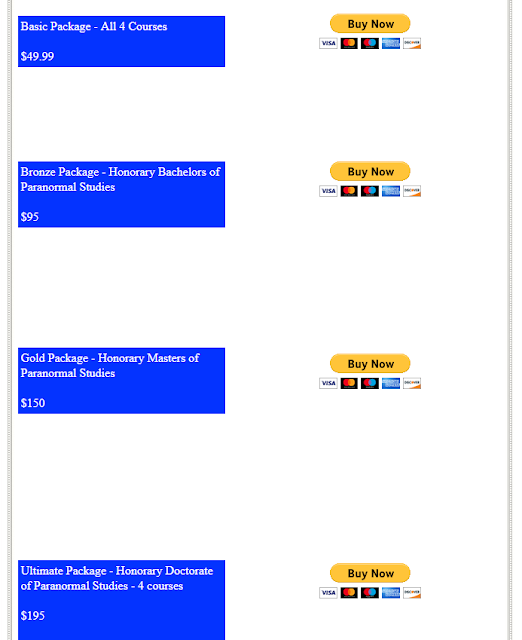 The 'ultimate package' an honorary doctorate will set Long's followers back a cool $195.

As an aside, I love the idea of a prospective-doctor walking into their University on the day of term and asking for "the ultimate package".
Rather bizarrely, Long's other site claims that he offers these qualifications "for free" but following the link provided leads to the same price list.

Long's site also documents the academic targets that students will have to meet in order to gain their qualification.

All this runs contrary to numerous statements on the site in which Long claims that the qualifications are "not academic" but "honorary". Despite this, Long also claims on the site that prospective students take the courses to "improve their skill base".

But that clearly isn't the purpose of Honorary degrees, which exist to bestow a title and recognition on the recipient without them having to study.

He wants to shill these courses but at the same time is painfully aware that oth he and his laughable organisation have absolutely zero credibility what-so-ever.

As always, the paranormal community's obsession with titles and the credibility they confer is deeply misplaced. Made up titles shouldn't confer credibility and won't as soon as the owner steps outside their very narrow circle.

In fact, employers strongly warn against mentioning degrees that have been purchased in ths manner on CVs and job applications (5).

People like Long prey on the desire to take a short-cut to expertise. If one can't become an expert in a disipline that actually exists, why not just make one up... Or better yet, pay Long $200 and he'll do it for you, no refunds!

Way back in the annals of time when I still went under the name Skeptic's Boot, I was involved in a bitter dispute with one Jayne Harris a paranormal "expert" who was offering the UK's first "accredited" paranormal diploma (4).

Now I don't think that Harris was anywhere near as mean-spirited or cynical as Long... I also suspect she is a lot smarter. But the underlying problem with what both Harris and Long are offering is the same.

They are encouraging their followers to sell themselves short.

The most common third-party comment in the discussion thread between myself and Harris was that I was an elitist. "Not ever one can afford a degree" I was told.

The thing is that if people want to learn, there is help available. Sure going for a degree will incur debt. Way too much debt. But it will improve the quality of life of its recipient. It will improve their earning potential and, who knows, might even help with their paranormal investigating hobby.

And degrees aren't the be-all-end-all. There are plenty of other courses and opportunities available for adult learners. That $200 dollars could be much better spent and than shoved into the pockets of James Long.

The people that offer these paranormal courses are not educators. They are running a cynical operation designed to replace the money of believers with a false sense of expertise and credibility. It's a worrying cycle of expliotation.