I sure that most of you who frequent social media, and in particular  paranormal sites, have seen this image by now. Its been circulating since at least 2010 and like a horror creation of old, it just won't die. 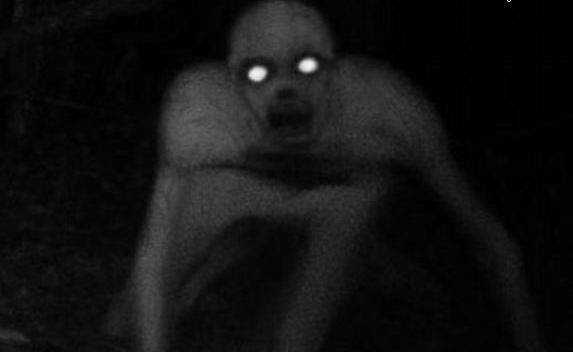 Now clearly this is a hoax. But its a great example of how difficult it can be to get to the bottom of what should be a by the numbers debunking. The image has been shared so often with so many different iterations that a simply Google search won't lead you to the original source. Many major news outlets picked up on the image, its been linked to the online horror site Creepypasta as the rake and even linked to an online viral marketing campaign of a computer game.

So what is the truth about this image? What is its origin? And is there anyway of conclusively showing it to be fake?

The ever reliable Daily Fail *ahem* Mail... that should read Mail.... reported on our woodland creature giving the back story. Its difficult to pinpoint exactly when the story was published. It states updated 13/10/10 but it must of been publish prior to this as the article referenced beneath this makes reference to the piece and that was published on 10/12/10.

"The hunter said he was lying in wait in the pitch black when a ghoulish spectre filled his sights.Its eyes glowing in the light of his torch, it leapt from the undergrowth and flashed a look at the camera before vanishing back into the bushes.
The hunter, who has chosen to remain anonymous, was so frightened he said he broke the camera but retrieved the image from its undamaged memory chip.
The picture was taken on a reserve in Berwick near Morgan City, Louisiana."

They go on to claim that the image and story could be promotional material for the Amazing Spider Man released just under two years later! 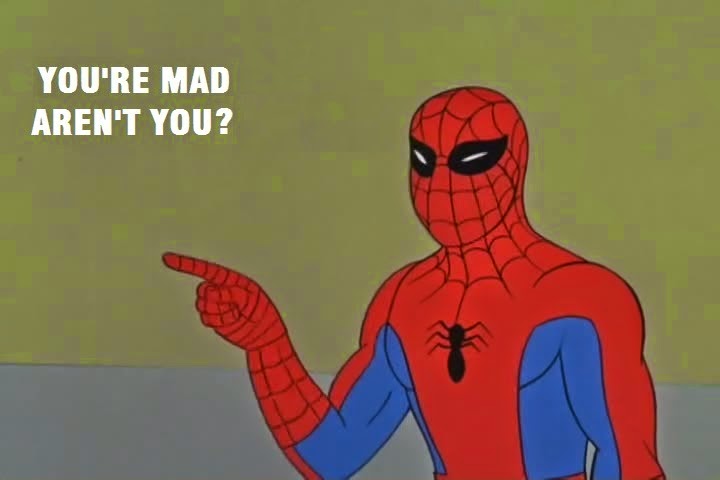 "....Conspiracy theorists will no doubt note the similarity between the figure's crouching pose and that used by Spider-Man, whose latest big-screen adventure has just begun shooting..."

Clearly journalists at the Mail aren't as familiar with the Spider Man comics as I am, few are, I'm a geek. I don't remember any iteration that liked to hang around in the woods scaring hunters!

Further searching found an earlier piece (10/12/10) reporting on a video games show and the promotional material for upcoming release Resistance 3, which featured our image and the same story given by the Mail.

Hearing that a computer game company claimed responsibility for the image was pretty conclusive to me:

"Announced during this year’s gamescom conference, Resistance 3 stole the show, with a stunning live action trailer hinting at the game’s content.... in in true Insomniac Games style, the developer has ramped up their viral marketing machine by releasing a scary image of a Grim in the wild, baffling media outlets.

An apparent deer hunter in Berwick near Morgan City, Louisiana posted the creepy picture on the Wildgame Innovations website , claiming he was lying in wait in the pitch black when the strange creature appeared. He was so frightened that his camera broke, (whuh...how does that happen?- SB) but he managed to retreive the image from its undamaged memory chip..."

Insomniac Games made this statement via Twitter:
"Whoops… looks like one got out. If you see a Grim on the loose… please return to Insomniac Games, Burbank, CA: http://bit.ly/fqGoXX"
The image certainly bares more than a passing resemblance to the enemy in the game, although it lacks the extra eyes. Could Insomniac be behind the image, or were they just exploiting media attention?


On December 3rd the image was posted to an Archery forum, by a user named "Hillbilly Willi" who had joined the forum over a year earlier and made 18 posts up to that point.

"Don't know what to think about this one fellers.... Went and checked my camera today and this is what it had on it.... The ground directly in front of my tree was completely tore up, the trail cam had been torn off the tree, straps were popped and everything. Camera was laying face down about 10 ft. from the tree it was attached too. Bark was knocked off the tree where the camera had been, like something had knocked it off while trying to twist camera off the tree. This was the only picture I got of "it" as I had it set on a 2 minute timer. The first picture is of "it", and the second is a picture from a lil while ago of the same spot, just for reference. Checking this right at dusk with a 3/4 mile walk out ahead of you will scare a feller.....

When I saw it, my blood ran cold. Still gives me shivers.... What do you guys think?? "

Notice here the story is somewhat different. Billi claims he found the camera damaged in the morning and the creature was never sighted by him directly. Also he doesn't break his camera in fear.

Now if Billi is the original hoaxer, he makes a mistake on this thread which may be his undoing. He posts another picture from the camera.  This time of a dear taken by the same camera and in the same location only 9 days earlier.

Take look at both. 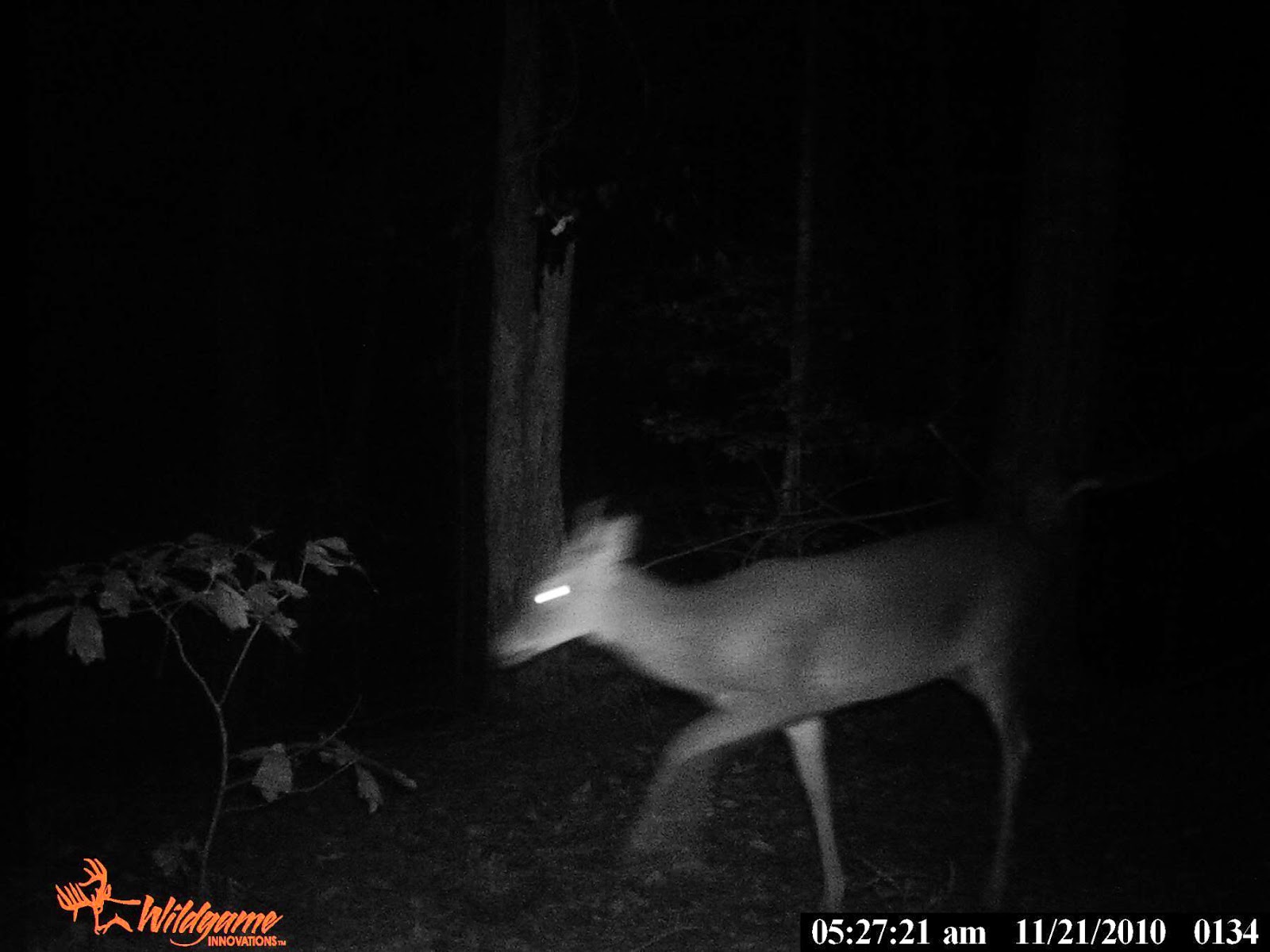 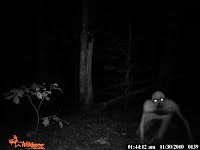 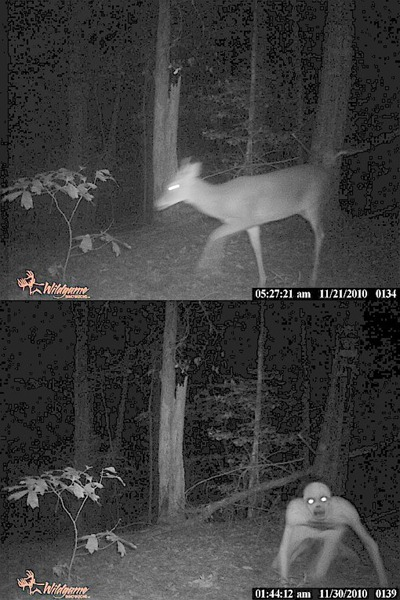 If this is nine days earlier, wouldn't one expect there to be some changes to the landscape nine days later? Also being at different times of day (creature 1:44 am *clearer on picture with thread quote* compared to 05:27 deer) shouldn't the lighting conditions by somewhat different? In both cases the conditions seem exactly the same. Almost as if this is the same photo or part of the same sequence of photos with the time and date stamp altered. In fact the only difference seem to be the pixel difference in  the "creature" photograph, which is clearly less than the deer photograph judging by their relative clarity.

Another interesting thing to note: On the deer picture there is considerable motion blur around the deer, implying that the camera taking has a slow shutter speed. If this is the case why is there no corresponding blur around the creature? If it isn't moving shouldn't Billi have more photos of it, as it moves into frame and towards the camera? 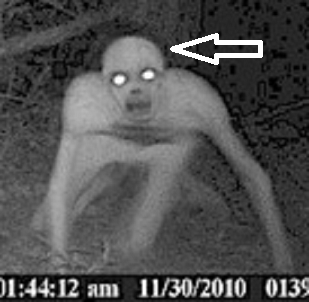 So that's speculation, the vague black halo around the creature's head opposite is a telltale sign of manipulation in an image suite such as photoshop. 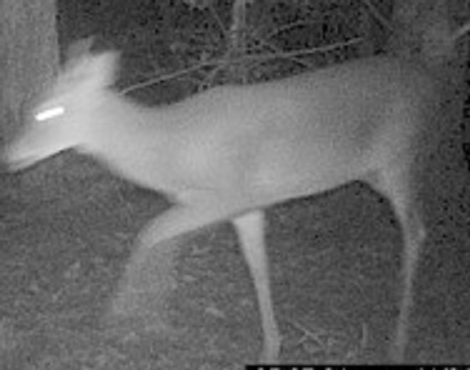 Notice there is no such halo around the image of the deer.

Running the image of the creature through an examination with Jpegsnoop shows direct evidence of tampering. 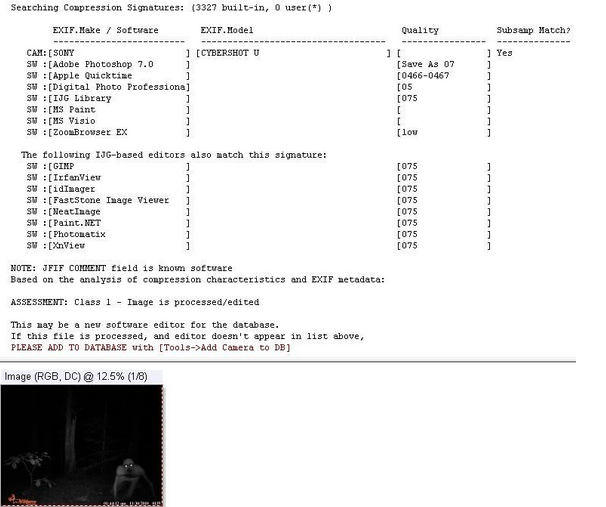 So it maybe lost to the annals of time exactly who perpetrated this hoax but the fact that it is a hoax is pretty undeniable. It may seem pretty fruitless to debunk an image that has been around so long, but experience should tell us that these images, like the monsters they claim to represent, never quite die.