A Quick Retcon: How Changing the Flash's History Made the Character Less Unique. 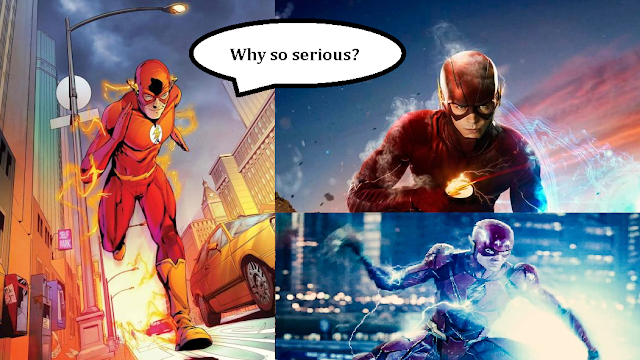 This month sees the release of the next movie in the DC extended universe film series, Zack Snyder's Justice League. The movie will represent something of a milestone for many comic-book fans as, barring two quick cameos in Batman Vs Superman and Suicide Squad, it will make the first big-screen appearance of comics premier speedster, the Flash. The movie is expected to be followed up with a big-screen adaptation of the limited series "Flashpoint" which will serve as a Flash solo movie. This is disappointing for me, a fan of the character since the short-lived 1990 TV series starring John Wesley Shipp in the titular role, as "Flashpoint" isn't really a solo Flash story. The reason it is popular with some DC comics fans is it features alternate versions of established DC characters in a timeline drastically altered by Barry Allen, the Flash, in one of his time-travel escapades. It's disappointing because I think that with over fifty-years of stand-alone stories there's more than enough material to justify a Flash solo-outing. It seems as if Warner Bros don't have much faith in the Flash as in his solo-outing he'll play second fiddle to Wonder Woman, Aquaman and an alternate version of Batman.

It's also disappointing as it solidifies my fears that a recent addition to the Flash's background, that has been upheld in his mediocre but fun enough TV series currently screening on US network the CW, will also be carried over to the movie version of the character. Before I explain what that is, it's essential to explain what the concept of a "retcon" is. 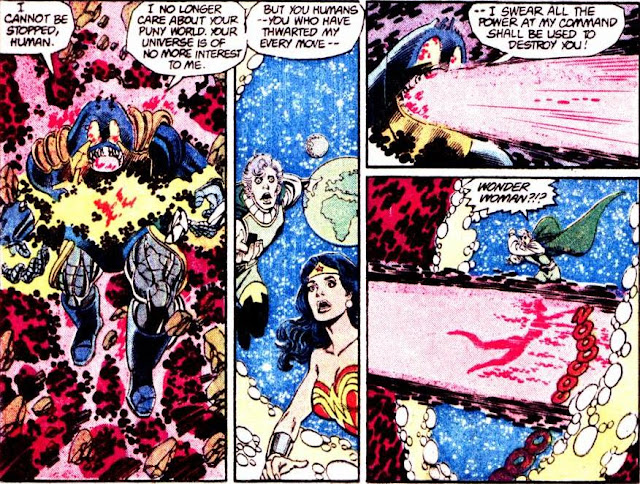 Essentially a retcon is when a fictional character's background is given an extra previously unknown element or aspect that had not been previously revealed to viewers or followers. The difference between this happening on a TV show and a comic book is that comic book retcons are often far more extreme than the introduction of a childhood friend or relation, comic book retcons can often change who a character fundamentally is and almost everything about that character. In terms of retcons, DC comics publishers of Batman, Superman, Wonder Woman and the Flash, are either the pioneers or the worst offenders based on your stance on retcons and whether you think they are a good or a bad thing. The most retconned characters in the realm of comic books are undoubtedly Wonder Woman and Hawkman. The latter has been alternately a museum curator and hero by night, an intergalactic space cop and the reincarnation of an Egyptian king, whilst Wonder Woman suffered the rather ungracious feat during DC's first major retcon "Crisis on Infinite Earths" in 1985, of being completely wiped from continuity so she could be reintroduced in 1986 as a "new hero" to the DC comics universe. This means her role as a founding member of the Justice League was given to fellow heroine the Black Canary. Her origins have been retconned several times since this, it seems that everytime a high-profile creator takes over the Wonder Woman title a change to her origins is enforced. 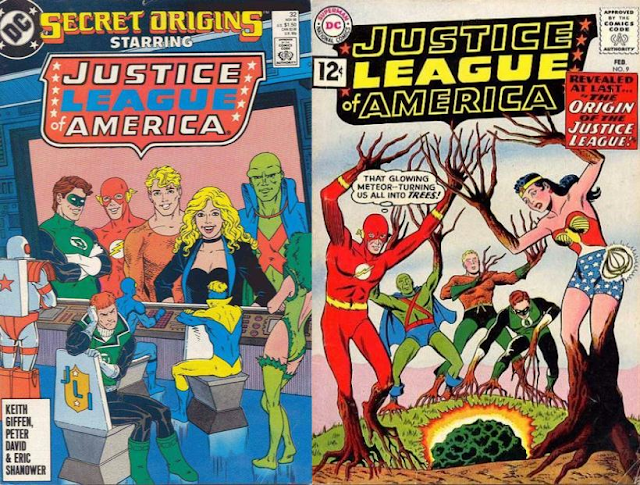 In terms of retcons at DC, the Flash remained relatively untouched until recently. This is likely because the Flash is one of DC's "legacy heroes", in that many people have taken the role on different occasions. Barry Allen, the character most associated with the title was the second character to hold it after the original Flash Jay Garrick. When DC sought to reboot its universe in 1985's Crisis on Infinite Earths, the Flash escaped the retcon eraser wielded on Wonder Woman, Superman and others by having Barry Allen die and be replaced by his protegee "Kid Flash" Wally West.

This was a genius move by DC. Under the guidance of some of the comic industry's finest creators such as Mark Waid, William Messer Loebs and Grant Morrison, Wally became one of DC's most identifiable and likeable characters. His powers at first paled in comparison to Allen's, with this gradually revealed over many years and 78 issues to be a psychological effect of Wally's fear of replacing his mentor and beloved uncle, To Wally, becoming as fast as Barry meant accepting that he was dead and not coming back. It was only when faced with having Barry's worst enemy do this in his place that Wally finally stepped up and became the equal of his predecessor. 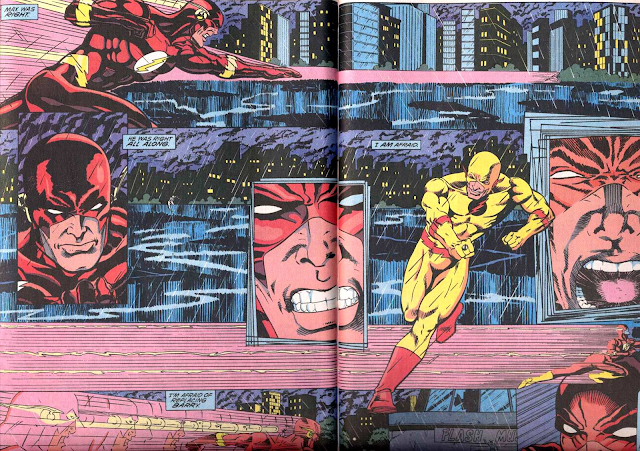 This continued for roughly ten years, with Wally settled in the role of the Flash and finally starting to appear in cross-media appearances as the holder of the title, something the 1990s series had avoided, until DC decided that their 2005 major reboot "Infinite Crisis" should feature a shift of the Flash role as it's 1985 predecessor event did. This time Barry Allen's grandson from the future, Bart Allen, seized the mantle of the Flash. Bart had been introduced in Wally's series as the reckless and immature Impulse. He later took Wally's of Kid Flash, following his path to the main speedster of the DC universe. Unfortunately, the move was an unmitigated disaster. Bart was not as sympathetic a character as West, who had been a staple of DC comics almost as long as Barry Allen, and the writing of Bart's, now the third Flash, solo series was incredibly poor. Fans simply didn't accept Bart as the Flash. DC decided to cut it's losses and killed Bart in brutal and unceremonious manner, then having West return from his hiatus to avenge Bart's murder. Along with him, Mark Waid, the writer who made West a fan-favourite and had him finally accepted as the Flash, returned to smooth the transition. Unfortunately, even Waid couldn't achieve this. West had moved on and so had Waid.

The decision was made to return Barry Allen to the role of the Flash after him being dead for over twenty years. There was just one problem. Barry had been, for lack of a better term, something of a bland character. He was far more valuable to DC as a measuring stick of heroism to the DC universe. Over the twenty years, he had been gone Allen had achieved close to sainthood. It was clear that if he were to be accepted in the modern age of comic-books, Allen's character would have to be significantly fleshed out. This job fell down to up and coming DC writer Geoff Johns, the man now with a major role in the development of DC television series and big screen adaptations.

Johns decided that what Allen needed was a more tragic backstory and a more typical reason for becoming a superhero. He did this by introducing the idea that Barry's mother had been killed by his arch-nemesis the time-travelling Reverse Flash, as an act revenge against his constant defeats at Allen's hands, oh and the fact that Allen had previously murdered him in the 1980s! Adding insult to injury, Allen's father, Henry, was falsely accused of the crime and had died in prison. The events of Flashpoint, the inspiration behind the upcoming Flash movie, were caused by Barry travelling back through time in an attempt to save Nora Allen, his mother.

Allen was now an orphan, inspired by the fates of his parents to help others. Sound familiar? 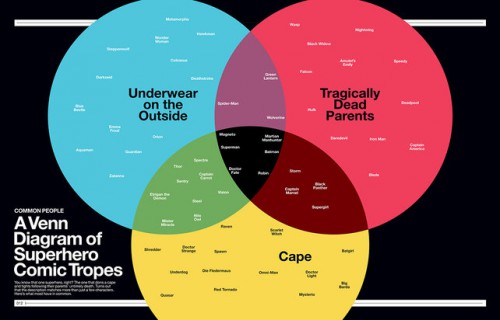 What Johns had essentially done is provide Barry Allen, the Flash, with an origin story shared by a multitude of heroes. Batman, Superman, Spider-man and numerous others had been inspired by the loss of parents or father figures. Johns had also retconned Green Lantern in EXACTLY the same way a few years before this, having Hal Jorden's father killed in an air-crash which Jordan witnessed. Clearly introducing this as the inspiration for Allen's heroic activities, made the character significantly less-original. The original version of Barry Allen used his abilities, not because of revenge, or a misplaced sense of responsibility. Allen became the Flash because it was the right thing to do. This is what differentiated him from other characters. When the Flash arrived to combat Captain Cold, the Mirror Master or Gorilla Grodd with a crack of lightning and a smile he did so because it was the right thing to do.

In a Secret Origins annual published in the late 1980's. It is shown that at the time of Allen's death he is transformed into pure energy. A lightning bolt. He travels back through his own timeline approaching a scene all too familiar to him. He realises that he has become the very bolt of lightning that initially granted him his fantastic abilities. He has a stark choice. If he strikes his younger self it will lead him down the path to his eventual, unavoidable death. He chooses his fate anyway. 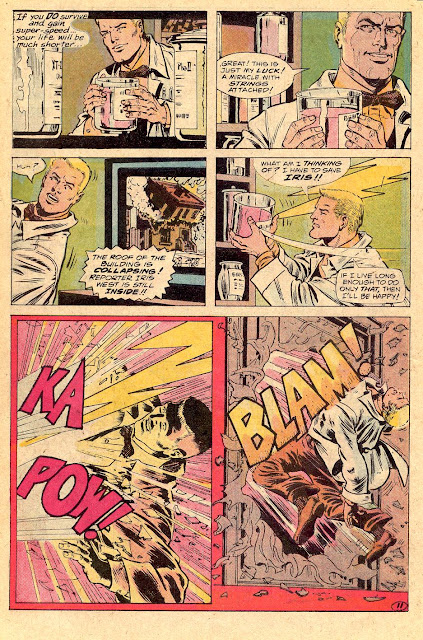 Barry Allen's, the Flash's story, should be one about personal sacrifice. A morality play about doing the right thing to help others even though it hurts and it costs you the peaceful life you deserve. I'm so sad that in these morally grey times, my children won't have a hero of scarlet and gold who helps others for no other reason than that's what good people do. I think we all need that today. The Flash isn't meant to be a grim and gritty hero, and I don't think that a dark outlook necessarily makes for a more complex character. I'll be there when the Justice League Movie hits cinemas with my son and daughter. I'll hope that the heroics of the Flash thrill them, but simultaneously, I'll be saddened that this version won't teach them that one doesn't need a tragic backstory to be a hero.
Posted by Robert Lea at 02:44 No comments: