The Huff Model: Disrespecting The Dead For Publicity and Financial Gain.

What is it about certain individuals and groups within the paranormal field that causes a complete abandonment of any idea or taste and decency with regards to the recently deceased? Where are these team's ethical standards when it comes to consideration of the loved ones, friends and family members of the recently deceased?

In the horrible example here, the only answer can be "completely absent".

I've written about a repeat offender in this regard, Steve Huff, several times before (1). Huff's MO is supposedly using ITC methods, mostly with devices he builds and sells himself (2) to contact recently deceased celebrities. The most disgusting example of this was when Huff claimed to have contacted former Ghost Adventures star, Debbie Constantino (3), a few short days after she was brutally by her partner Mark. There was a groundswell of disgust at this from the paranormal community that had been absent during Huff's sessions with dead celebs. To many, Debbie was well known and well liked, and they saw Huff having crossed a line that he had previously not crossed.

None of this deterred Huff, after every celebrity passing you could predict with morbid certainty that Huff would be exploiting it shortly after with little regard for the hurt he caused. He continued this grim pattern undaunted until earlier this year, in early August, when he suddenly declared that as a result of "demonic attacks" he was quitting the paranormal/ITC community for good (4). There was a lot of suggestions as to what may actually be behind Huff's exit, with some suggesting possible legal woes on the horizon and others implying that various trading standards agencies were, at last, taking an interest in his sales practices. I myself was very curious about Huff's motivation, mulling over the possibility of this all being in view of a potential book deal. Whatever they suspected Huff's reasons for quitting were, few were surprised when Huff was back up to his old tricks a few weeks after quitting for good and fewer still were surprised that his operation hadn't changed one iota. Since Huff returned, he's conducted sessions in which he's alleged to contact Hugh Hefner and Tom Petty.

As I've stated before, I think Huff is utterly disgusting. He seems to have no issue with using the deaths of celebrities to promote himself. His practices are cold, cruel and completely devoid of compassion or empathy. I never thought I'd come across an individual or group more contemptible than Huff in the paranormal field, hobby or whatever you choose to call it.

That all changed today.

"Paranormal Den" is a group that predominantly produce EVP and ITC videos for Youtube and Facebook, where their page has almost 11,000 followers. They do not hide the fact that they are heavily influenced by the aforementioned Steve Huff, they use similar equipment, like his FB page and even have claimed to have contacted Huff's spirit energy in the past (6). Unsurprisingly, given this influence, they also conducted sessions with deceased celebrities, Chris Cornell and Chester Bennington. Clearly, this makes them as tasteless as Huff, but what makes them worse?

How have this group lowered the bar?

On October 7th Paranormal Den, presumably comprised of the two individuals pictured in the page's profile image, though they aren't specifically named on the page or the Youtube channel, decided that they would attempt to use a radio sweeping device to contact the spirits of the victims of the Las Vegas massacre. 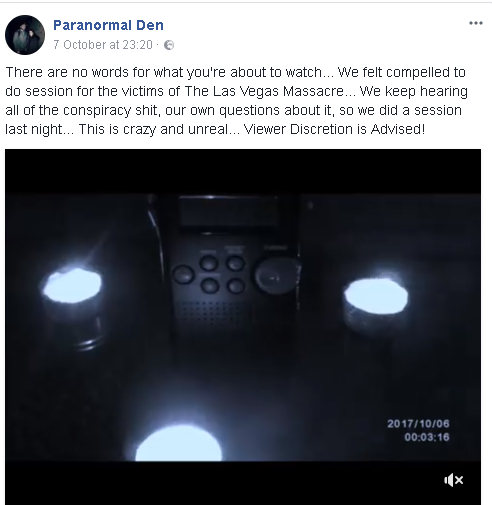 "Crazy and unreal" they call it.

I call it crass and shameful.

At this point, I am posting their video, I am not going to give them the views and attention they desperately seek. Even though I've ripped it directly from their Facebook page. It's bad enough I had to watch it, I don't want to encourage you to do the same. It's here for completeness, nothing else.

The "session" is laughable. The purpose they claim is to question the spirits with regards to the ridiculous conspiracy theories circulating regarding the Las Vegas shooting, such as the debunked idea that there was a second shooter at the Mandalay Bay Hotel (7). You'll be unsurprised to learn that the usual tropes and errors associated with the presentation of EVPs are all here. The audio is presented with captions explaining what the "spirits" have supposedly said resulting in a highly suggestive experience. I listened without captions as I always do with ITC and didn't get any results that Paranormal Den caption. When they hear "execute" I hear "eggs" for example. In addition to this, the responses that were supposedly given barely line up to questions asked even if we accept Paranormal Den's interpretation of the snippets collected by the broken radio they consider a piece of scientific equipment. What is especially laughable about this is the footage is heavily edited with lots of cuts implying that the laughable responses are the cream of the crop in regards to what was collected.

I have to wonder if Steve Huff is aware of this group? Maybe, they're in his shitty ITC collective. I wonder if he is, does he have the balls to condemn this disgusting exploitation of innocent people gunned down by a lunatic. Steve, if you're not aware of them, they're certainly aware of you. They're following the model that you've established withs regards to high profile, exploitative ITC sessions.  This is your legacy. Hopefully, the next "attack" you suffer that prompts you to quit won't "demonic" but one of conscience. That said, I suspect that like demons, you're conscience is highly unlikely to actually exist.