If you cast your minds back to May 2017, you may remember I talked about a prospective ghost-hunting television show called 'Haunted Tours' (1) that was to feature one Stephen Erikintalo. Erikintalo distinguished himself from other paranormal investigators with 'extreme' antics such as lying on disused train tracks with a Ouija board on his stomach. Whilst he and the producers of the show, the Jalbert brothers (2), enthused about how revolutionary this ghost hunting show/ Jackass hybrid would be, with Erikintalo even branding other investigators "pussies" on his Facebook page, I worried what effect reckless disregard for safety and bullshit machismo would have on the paranormal community at large. We're talking about a community here that is built on copying TV shows and rampant 'one-upmanship'. I don't want to see someone hurt replicating the actions of Stephen Erikintalo, especially the utterly stupid act of lying down on active railway tracks. 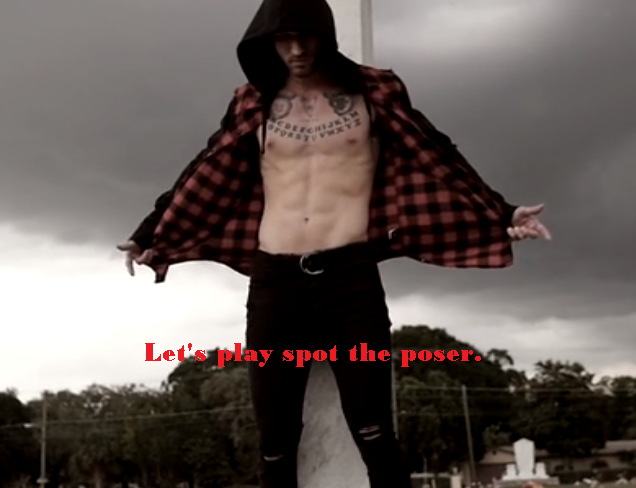 I also cast some doubt that the show would appear on Amazon Prime, Hulu and Netflix in October of that year as Erikintalo and the Jalberts claimed. Well, I was wrong. Kind of. The show has been released to the public, albeit only on Amazon Prime and much later than October 2017, with its European release on the service occurring in March 2018.

I was informed of this fact by one of the producers, Brian Jalbert. The Jalberts seem extremely happy with the show's performance thus far, posting figures of watch times on Amazon to Facebook. 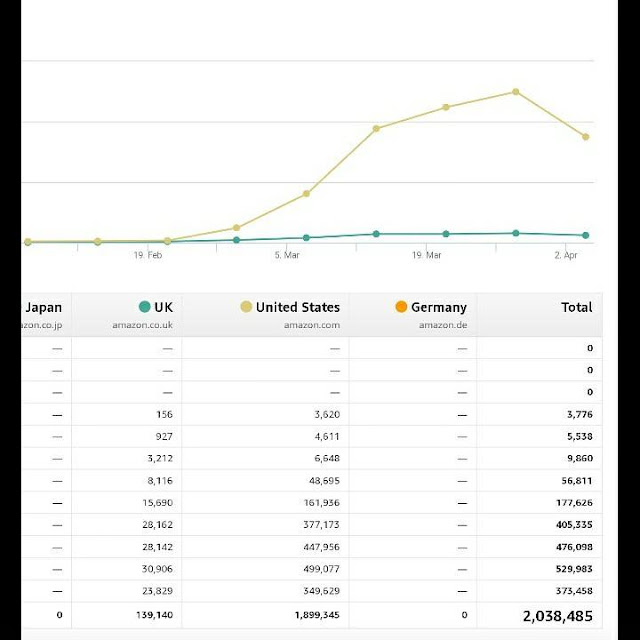 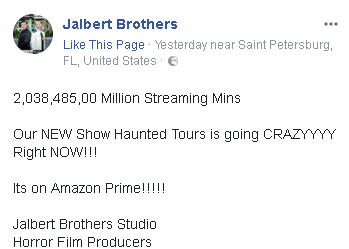 Unfortunately, Brian seems to have cropped the y-axis off his graph and the values column on his table. This means we have absolutely no idea in 2,038,485 are watch minutes (as Jalbert says) or watched seconds. He also claims the table states a total of "2,038,485,00 million watch minutes"!

Just a slight exaggeration there boys!

As Brian was kind enough to reach out to me, I decided it would only be fair to reciprocate by watching a couple of episodes and giving you all my thoughts on the show. I took a look at three episodes of the five-episode first series, episode 1: Mr Nasty, episode 2: I killed them and episode 4: Gunsmoke.

Each episode of the show begins with a warning to the audience as is standard with paranormal shows of this kind. Unlike other shows, the warning makes no mention of the fact that the show is for 'entertainment purposes only' but rather focuses on the 'extreme' nature of the show. Something tells me earlier on I'm going to get very tired of the word 'extreme' very quickly.

There's a fantastic moment in the first episode when an on-screen graphic and voice-over asks the audience "Do you believe in ghost" Clearly they spell check the later episodes as the graphic is corrected but the voice-over remains "ghost" rather than "ghosts".

The episodes follow the standard established in US ghost hunting shows. The team arrives at the location, receive a daylight tour by someone familiar with it who also relays some suitably spooky stories and highlights points where activity is alleged to have taken place which will be revisited later during the investigation.

Another commonality the show shares with others in its genre is the over-bearing production style. Camera filters are used frequently during the course of the episode to add a sepia tone to the screen. In addition to that camera shakes and static is added, as well as camera status bars for some reason. It's frustrating and definitely indicates that the show favours style over substance. This sepia overlay with the grainy 'film-like' effect is so pointless, it's meant to invoke an old-fashioned, antique feel, but immediately takes you out of the show when you consider that Go-Pros are a fairly recent invention.

Likewise, the soundtrack of stock 'creepy' music is overbearing and obnoxious. At one point in episode 1, Victoria and the crew claim to have heard a noise from above in the property. We don't hear it though, as at the moment it supposedly occurs there's a loud music cue. These things are meant to invoke a mood, it's the adequate establishing of this mood that has led to the success of paranormal programming and certain horror franchises. But when it's done clumsily, it just takes you out of the programme.

We are introduced to the team. Our 'extreme' investigator Stephen Erikintalo, our host and 'skeptic' Victoria Catherine and the Jalbert brothers, Brian and Jake. During the course of the episode, we also meet Nick, the camera-man, who presumably doesn't have an introduction despite being a key player in episode 4 especially.

The idea of Victoria's role as a 'skeptic' becomes quite ludicrous within the opening moments of 'Mr Nasty'. During the trip to the team's first location, the May-Stringer house in Florida, Victoria discusses her history with the paranormal. 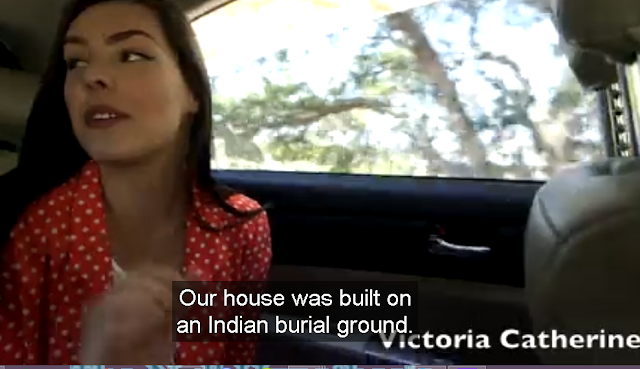 During this discussion, Victoria reveals that during her childhood she'd lived in a house built on an 'Indian burial-ground'. Yep. That chestnut. This is our skeptic remember. This kind of thing continues during the course of this episode and the subsequent episodes. She seems almost unsure of her role in the show at points and swerves from screaming to cooly assessing events at a later point. Almost as if the Jalberts are having to remind her "You're the skeptic..."

What's interesting is Victoria also makes a couple of Freudian slips during the episodes I watched. One, in particular, is so revelatory that I can't believe the Jalberts left it in the show!

During the investigation in episode 1 whilst in the May-Stringer attic, Victoria claims that she is experiencing a burning sensation in her arm. It's quite clear at this point that she is offering a performance and not a particularly convincing one. There are moments when she is quite visibly corpsing and suppressing laughter. And then she seems to stop panicking and says "...I think it's more realistic if I cuss...."

If this incidence was real and not purely for the cameras, why would Victoria care whether it seems "realistic" or not? It seems to me that Victoria is breaking character here and checking her performance against the Jalbert's expectations.

The role of Victoria Catherine over the episodes seems not to be the skeptic at all, rather she seems to be the one most emotionally affected by the proceedings. It also becomes clear the Erikintalo wants to goad our host into an emotional response. During the episodes, Erikintalo frequently urges 'the spirits' to grab or harm Victoria in some way. 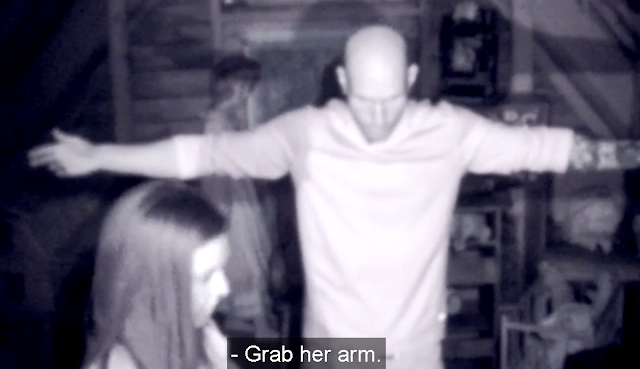 During episode 4, Gunsmoke, filmed at the Cuban Club, Stephen encourages Nick and Victoria to role-play a violent incident in the location's history. During this Nick grabs Victoria's hair, yanks her head back and shouts in her face. 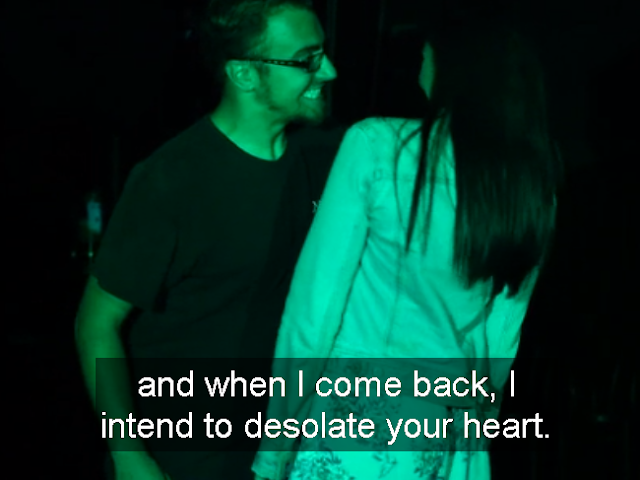 As for the promised extreme content, episode 1 is most notable for how mundane it is. I was seriously bored by the time Erikintalo showed up at 19 minutes and was surprised when he does very little performing two EVP sessions and two-spirit box sessions which are completely uneventful.

Episode 2 sees Erikintalo determined to make something happen. It seems the crew want to avoid the possibility of another wash-out. Victoria even predicts, in another veil-lifting moment, that Erikintalo will try to "Pull out some scary things." 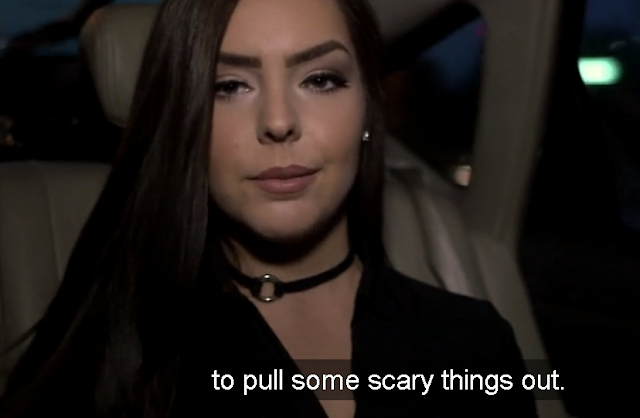 This prediction seems on the money, as it's during the course of this 'investigation' that Erikintalo leaves the building to lie down on nearby train tracks. We're told these train tracks are active, and indeed we have already seen a train on them. This act is completely and utterly stupid and marks Erikintalo out as nothing more than an attention seeker as it achieves literally nothing of value. Frankly, he comes off as a complete prick. It seems that at least one crew member agrees. Nick the cameraman repeatedly tells Erikintalo to get up and seems quite angry and upset by the incident. 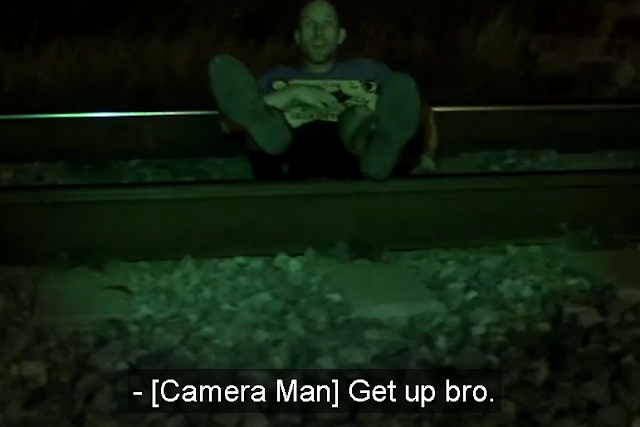 Erikintalo seems lacking in any kind of actual expertise. His explanation of how spirit boxes work is vague and incorrect for the most part. When he makes statements such as "mirrors trap parts of you as you turn away. The dead is trapped in the mirror" he just seems to be making his explanations up as he goes along. And he's not particularly good at improvising. It's garbled and hardly gives the impression of knowledge in anyway shape or form. 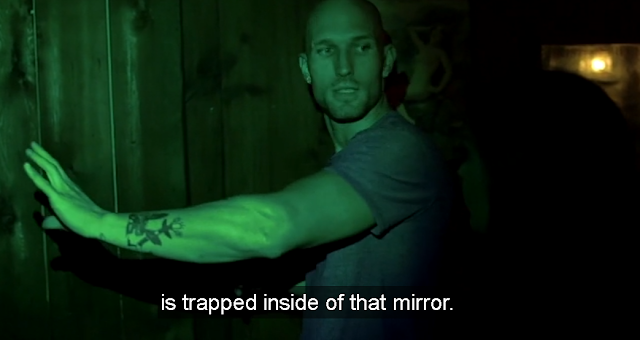 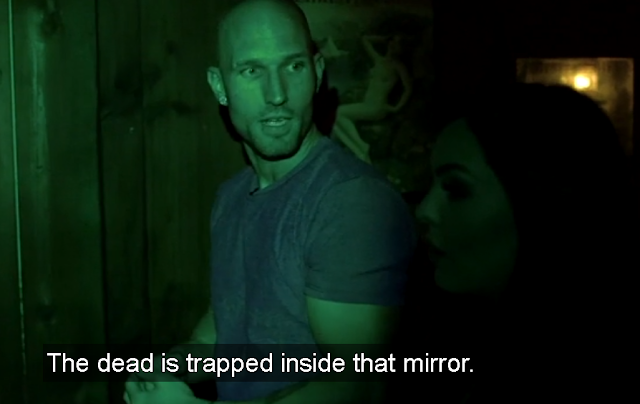 All this reinforces the fact that I can find virtually no information about Erikintalo before the filming of Haunted Tours barring an unsuccessful Kickstarter project in 2015 (3) and a smattering of internet radio interviews. 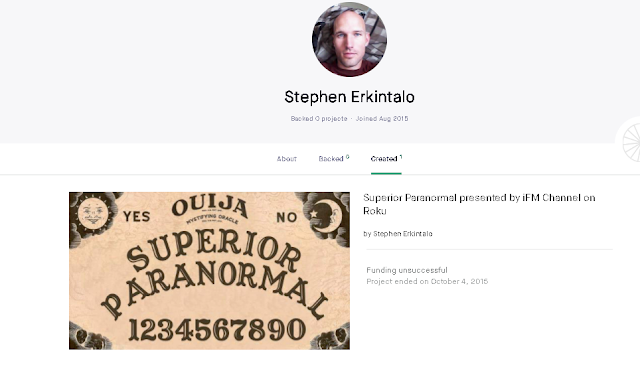 The only other trace I could find I could of Erikintalo was as a male model with the agency model mayhem (4).

All this is odd considering Erikintalo's claim to be the most "controversial investigator in the field". Surely if he were so controversial people would be talking about him? 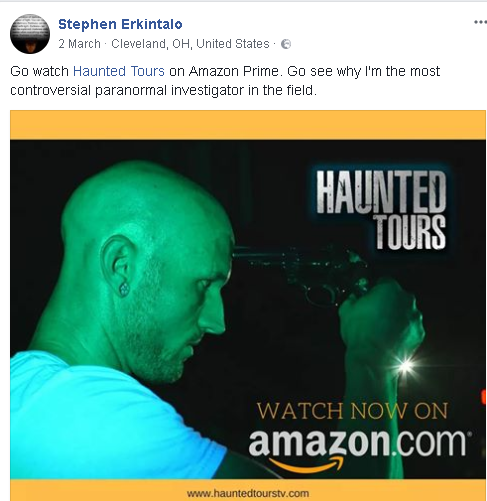 The greatest fault of Haunted Tours is that the promotional material for the show promised us that this would be something different and yet the show does nothing to distinguish itself from the pack. I didn't find it the least bit entertaining and I can't really see many people concluding differently.

Both Catherine and the Jalberts come across as likeable. It's clear Victoria is not suited to the role of skeptic and seems to be uncomfortable and unsure what she should have been doing at times. I think cameraman Nick would have better suited the role.

Erikintalo fails to live up to his 'extreme' label. When he performs his stunts they seem sophomoric and immature and he comes across as deeply unlikable. Most worryingly he doesn't seem to display any real expertise at all. Any equipment he brings is carried in his pockets. It's amateurish and gives the impression of someone who thinks attention-grabbing stunts will distract from this aura of vagueness and bluster.

It fails to rescue the show from the mediocrity it shares with its peers.

(4) https://www.modelmayhem.com/stephenerkintalo
Posted by Robert Lea at 20:50 No comments: