File this one under,  take caution any time you read the phrase 'scientists confirm' on social media. You can significantly increase that caution every time the article making the claim is shared by a 'woo-favourable' page or group. 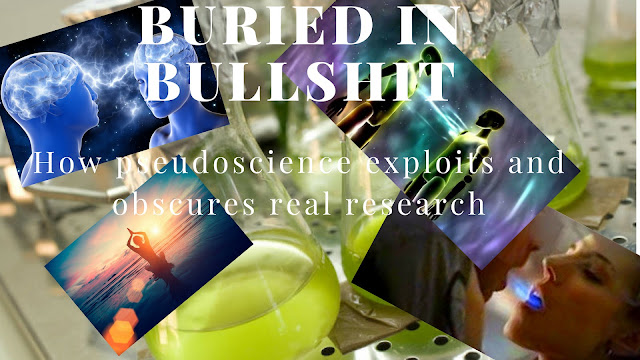 The article in question that we will be looking at today is 'Scientists Confirmed That People Are Capable Of Absorbing Energy From Others' published by website 'Wonderneed' (1). In examining the claims made in the article we'll delve into the usual misrepresentations of science pushed by pseudo-scientists, especially misuse of the term 'energy' and reference to 'quantum physics' without context or true understanding. We'll also find that there is genuine research at the heart of the story that has been blatantly misrepresented.

As usually happens with any debunking I perform, I'm going head off the inevitable criticism I always receive, why is it important to correct this article?

Firstly, it is misrepresenting someone's hard work, maybe even their lives work. It has the potential to damage their reputation, it could cost them work. Whilst you may not have heard of the website 'Wonderneed' (I certainly hadn't before reading this article) this piece has been shared over 19,000 times.

Before we get into the "science" discussed in the article, it's useful to look at some of the other issues with the post. Firstly, the title may sound familiar to you despite the fact that it has only just been published. Don't worry, you're not having a deja vu event.

A version of the article was originally published on the website 'Disclose TV' back in 2016 (2). 'Wondershare' even used the same low-quality image that Disclose TV used, just flipping it. They also slight changes to the title. The thing with these changes is that any editor worth their salt would look at that headline and suggest it was a bit cumbersome. The likely correction would revert it to its original version. 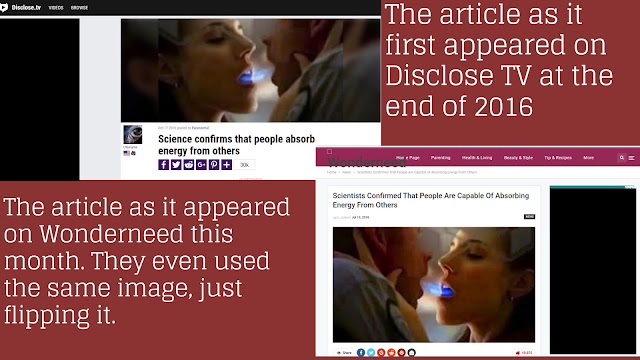 The article also appeared in a similar form on the website 'Soultype' in February of this year with the same images, under the title 'Science Shows That We Absorb Each Other’s Energies'. All the articles contain similar errors and the same fundamental manipulation, so when I state "this article" you can consider that to mean any of the three variations mentioned.

Worth mentioning too, I know that human beings can absorb heat from a nice hug, but let's restrict the discussion to energy that can be used by the metabolism. Hugs later.

Unpicking the research from the rubbish


Like most articles of this nature which claim to be based on actual research, when that research actually exists and is credible, what you find is that a significant bait &switch has been performed. There is actual research at the heart of this claim, but it in no way supports what the article claims.

The research, conducted by Professor Dr Olaf Kruse proved extremely difficult to find as none of the articles cites it directly and the link in the Disclose TV article leads, not to nature as it claims, but to Natural News. Not two sources I'd advise getting confused.

Eventually, I was able to find the original work (3), which confirmed that at least the article in focus had elements of that study more or less correct. But that doesn't mean they aren't going to take it to some wild, wacky and wholly unintended places before they're through with it. The lack of a correct citation and a link to the research or even mention of the publishing journal almost gives the impression that the writers of these articles don't want you to read it. Almost.

Essentially, the research suggests that the photosynthesising green-algae Chlamydomonas reinhardtii is able to secrete an enzyme which is able to break down the cellulose contained in cellular walls of surrounding plant-life in order to use it as a source of food. It does this only in the absence of the necessary conditions to photosynthesise.

This was the first time this kind of ability was observed in plant-life. It has previously been believed to be restricted to Fungi and some other organisms.

Armed with this legitimate science, the article sets sail to wooville.

"A biological research team at Bielefeld University has made a groundbreaking discovery showing that plants can draw an alternative source of energy from other plants. This finding could also have a major impact on the future of bioenergy eventually providing the evidence to show that people draw energy from others in much the same way."


"In much the same way..." indeed. What? By soaking surrounding people with an enzyme that breaks down their outer-layers? I think that we wouldn't need this finding to provide evidence of those around us doing this. In would, in my humble opinion, be quite noticeable. And disgusting.

The article brings in Dr Olivia Bader-Lee to discuss the team's findings. It's good practice for a science article to bring in an expert in a field who wasn't involved in the study being reported, but Bader-Lee isn't an expert in this field. She is described in the article as a "psychologist and energy healer" neither of which qualifies her as an expert in biology.

"Flowers need water and light to grow and people are no different. Our physical bodies are like sponges, soaking up the environment. “This is exactly why there are certain people who feel uncomfortable in specific group settings where there is a mix of energy and emotions,” said psychologist and energy healer Dr. Olivia Bader-Lee."


There's a certain amount of permeability to our skin, which means we absorb some moisture and our skin absorbs sunlight to produce vitamin D, but even in its most charitable interpretation, that is not what Bader-Lee means by that statement. At no point is what Bader-Lee suggests comparable to what the cited research shows.

We don't secrete enzymes on our neighbours to digest them, our emotions (or skin for that matter) are not constructed from cellulose. We don't photosynthesise as we have a very effective digestive method.

What the article also does is conflates 'food' and 'energy'. Although food is used to create chemical energy, the two aren't totally synonymous. Nor can the chemical energy used for survival be compared to the vague idea of 'energy' floated by Bader-Lee.

“When energy studies become more advanced in the coming years, we will eventually see this translated to human beings as well,” stated Bader-Lee. “The human organism is very much like a plant, it draws needed energy to feed emotional states and this can essentially energize cells or cause increases in cortisol and catabolize cells depending on the emotional trigger.”


Plants don't have 'emotional states' and this isn't an 'energy study'. It's a study of a biological mechanism, unknown in plants until now.


"Bader-Lee suggests that the field of bioenergy is now ever evolving and that studies on the plant and animal world will soon translate and demonstrate what energy metaphysicians have known all along — that humans can heal each other simply through energy transfer just as plants do. “Human can absorb and heal through other humans, animals, and any part of nature. That’s why being around nature is often uplifting and energizing for so many people,” she concluded."


How does this study relate to any kind of mutual 'healing'? This is a case of plants eating each other. Hardly a healing experience for the organism being consumed!

Essentially, what the article contains is simply a massive bait and switch. We're fed a legitimate piece of research and then it's quickly replaced with some utter rubbish about energy. I feel sorry on behalf of the researchers involved as a Google search of their names now brings up a cacophony of noise that drowns out their hard work and dedication.


It's annoying too on the basis of the people who are tricked into believing that the utter bullshit of Bader-Lee has some scientific credibility. Bader-Lee is leaching on the hard work of others to fuel her own ideas. The algae have an excuse for leaching off others, what is hers?