Here's a story circulating the paranormal sites at the moment: Casting agent seeks naked ghost hunters for a new paranormal show.  Apparently e-mails have been sent out from television production company Matador content, to various paranormal investigative groups to take part in such a show (NB- in her response below Chrissy is keen to point out, she did not send multiple e mails. Her version of events is that she sent one e-mail which was shared by the recipient). Although the general reaction to this has been negative to this in most quarters of the paranormal field, I have no doubt there will be be takers: there are plenty of groups and individuals "in field" whose main interest is TV exposure. 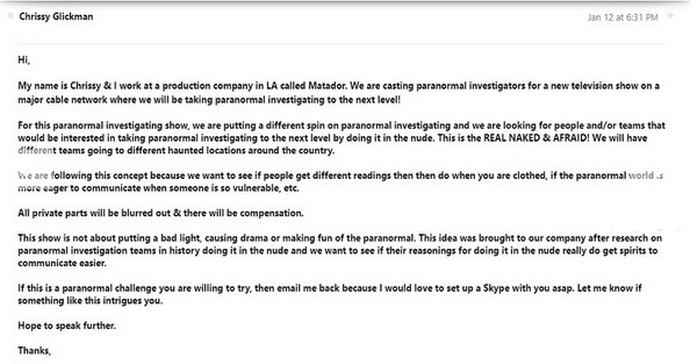 Two things spring to mind with this story:

1. How over saturated must the paranormal TV market be if producers need to add such a blatantly exploitative "twist" to the genre? I have a passing interest in such shows, but at this stage I couldn't legitimately tell one from another. More are commissioned every year just to replace the shows cancelled. The lack of imagination in the genre is staggering.

2. I'm not sure this is actually a "genuine" TV show. Certainly I think the e mail was sent out, and a little bit of checking shows that the production company involved is legitimate and Chrissy Glickman also seems to be a genuine casting agent judging by her IMDB page. Matador certainly makes a lot of "reality" television. I'm sure there is a TV program at center of all this, but I'm not entirely sure its going to be a paranormal show. This strikes me as an attempt to get some over-eager, fame-hungry folks to humiliate themselves for the chance at fame. I suspect that the show involved may be a hidden camera show comprised of a series of practical jokes.

(*sigh* Considering that matador have recently commissioned a series in which women give birth in the wilderness, the above may just be wishful thinking.)

"... to see if paranormal research teams get different readings and more evidence than when they are fully clothed. They believe that spirits will communicate with someone more vulnerable."

Who exactly formulated this idea? Based on what? Is there pre-existing investigation into this? If so I can't find it.

The e-mail also states that that the producer's research reveals:

Really? I've come across a lot of teams with weird and wonderful "investigative" techniques but no naked teams.... If fact the only hits I can find for "naked paranormal investigators" link to stories about this TV show and an earlier attempt to get a similar concept off the ground "Naked Paranormal" in September 2014. So this is utter rubbish then? If there are teams out there performing nude investigations why not just centre the show around them? Why the blanket e-mail.

There simply isn't a history of naked paranormal research, the attempt to legitimize this exploitative rubbish as continuing actual research is transparent and desperate.  I have little doubt this project will get off the ground.

Its just another hurdle for any legitimate research teams to overcome.

Here's a copy of the e-mail I sent to Chrissy Glickman asking a few of these pertinent questions. I will of course publish any response I receive. 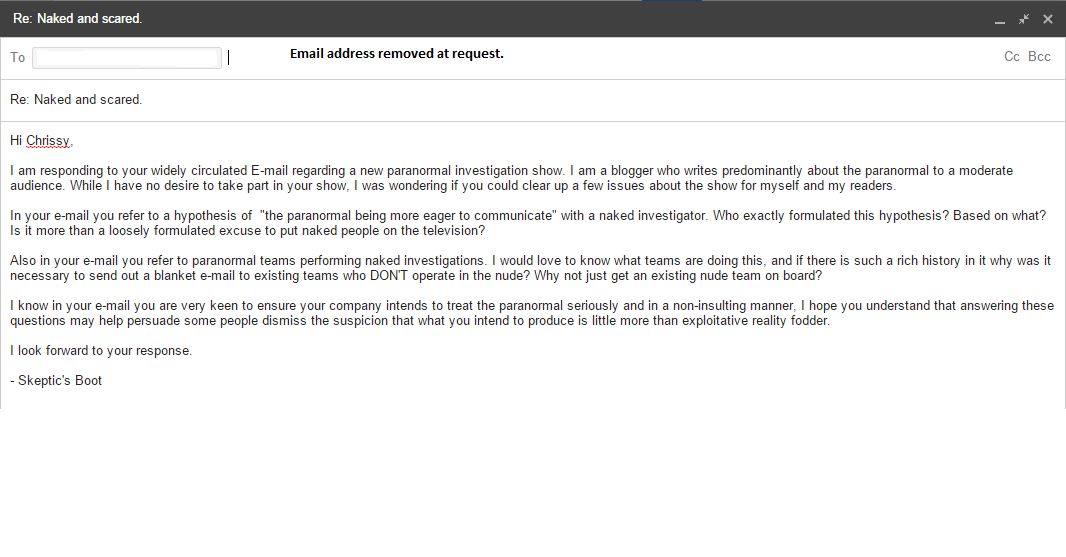 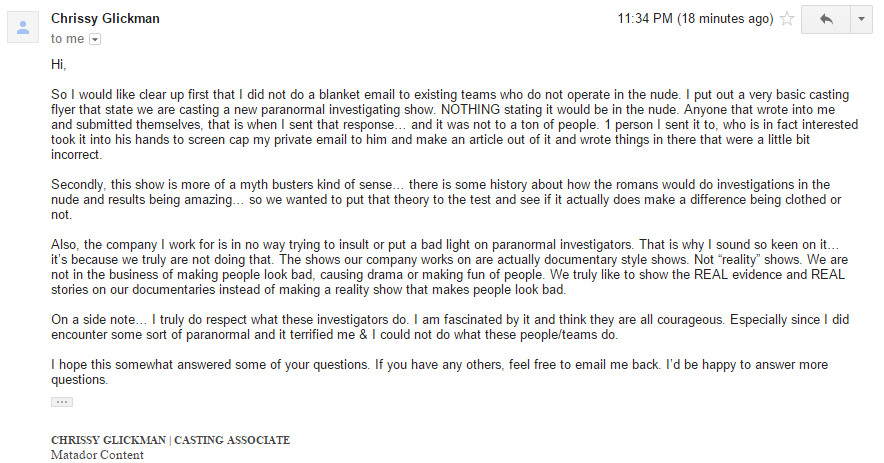 I'd like to thank Chrissy for her prompt response. Unfortunately there's little here to really justify the "naked angle", apparently the Romans conducted naked paranormal investigations, which is something I'll have look into, although it sounds highly dubious. (since writing this I've checked out Chrissy's source and it is without doubt one of the most moronic paranormal sites I've ever visited. Check out my review of this "source" here.)

Here's my response to Chrissy.