Bashing the Bishop. Examining the Claims and activities of James Long. 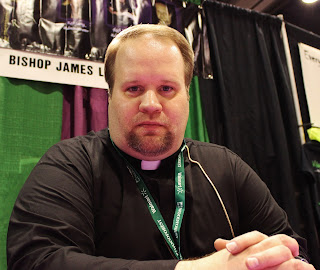 Ever since I reviewed Destination America's "Demon Files" and found it to be one of the most exploitative, trashy pieces of schlock ever to be vomited onto a television screen, I've been inundated with requests* to review Destination America's other recent exploit into the "demonic" Exorcism Live. The truth is I haven't seen it and probably won't. I have recently taken a look into one of the show's participants Bishop James Long, who has participated in a few other paranormal shows, is an author, an educator and an investigator.

You may deploy your pinch of salt now.

In addition to his Bishop and exorcist status, Long claims to be a demonologist, which as I've pointed out before is a title as meaningless as Fairyologist in the context that Long and others employ it. He is the founder of The Paranormal Clergy, a group that offers to cleanse and exorcise the homes of "demonic infestation". Their website offers advice on how you can tell if your home is occupied by a demon.

According to the group signs of demonic possession include amongst foul smells, growling sounds and badly behaved animals, knocking sound emanating from walls :

Wait.... Long and his group consider Poltergeist activity to be a logical explanation!

Perhaps not surprisingly the Paranormal Clergy's site contains not a jot of skepticism or room for doubt that demons actually exist. There is no attempt to even evidence the claim, the closest we get is this:

WOW... that is simply stated. Unfortunately to many people "Believe it because I've seen it" isn't a terribly convincing argument, especially considering the adage popularised by Carl Sagan "Extraordinary claims require extraordinary evidence".

Let's say you are convincing by being TOLD what you should believe, in fact you are so convinced that you want to become a demonologist and fight evil, Long has great news for you! He operates his own ParaUniversity were you can study.

Before you enrol though there are a few thing Long thinks you need to know. First and foremost his definition of Demonologist:

Hmmm... so be a demonologist you have to research the field (well yeah), and devote your life to that study.... that's a bit vague. You also have to be appointed by your Church leadership to investigate demonic cases. So Long has been endorsed by the Catholic Church? Yes... not the Roman Catholic Church... of course. One of the other ones. The United States Old Catholic Church.

Now stop that. The United States Old Catholic Church is totally a legitimate Church! According to their own website anyway!

And its a good job because, as Long states in this interview, one has to have good knowledge of scripture if one wishes to be a demonologist. Just declaring oneself to be a Christian isn't good enough, and Being a pagan is certainly out, if a Pagan weilds a crucifix it won't to anything to a demon he states (watch from around twenty minutes in).


These statements lead to some fundamental inconstancies in Long's worldview: Firstly, his own knowledge of Scripture, or certainly his interpretation,  has been quite heavily criticised. Reverand Jack Ashcroft had these comments to make regarding Long's book "Through the eyes of an Exorcist":

"I've read many books on the subject of exorcism, spiritual warfare, angelology and demonology, yet none were as light on content and, in my opinion, demonstrative of the author's lack of theological knowledge.... Long starts off by telling us there are four types of spirit entities that interact with the living; Human, Inhuman, Elementals and Poltergeists. I can only assume this classification is an invention of the author, since it does not come from Christian theology, either Protestant, Catholic or Orthodox. Long writes of homes he claims are “haunted” by human spirits...the idea that the spirits of the dead are hanging around haunting people is Biblically fallacious. The Apostle Paul tells us that to be absent from the body is to be present with the Lord. (II Cor. 5:8) There is no intermediate state wherein “ghosts” can stick around to bother the living. Beyond this, even if one were to take a different theological position on that matter, (On Long's use of smudging in Blessings) smudging would be out of the question. Smudging is a Native American animistic practice and as such would fall under the prohibitions of Deut. 18:10-12. The fact that Long either does not know this, or at best ignores these facts is quite disturbing considering his claim to be a Christian clergyman."


You can read the first part of the review which elaborates on Long's issues with scripture here.

Another of Long's inconstancies is his rejection of Wicca and paganism, in fact at 30:00 in the interview he positively rages at paganism and Wicca. But as Rev. Ashcroft points out above, Long uses smudging in his rituals- part of Native American paganism- at 33:00 Long specifically states he has no right performing Paganistic rituals... yet he does anyway! Long's philosophy seems to be a hodge-podge of what ever practices appeal to him.

Also if he rejects Wicca and Paganism what does that tell us about his own Paranormal Clergy team, which consists of two shamans! By Long's own standards it tells us we probably should be entrusting the exorcism of the family dog to them. The way Long rants in the interview one would suspect that he wouldn't trust a shaman to walk the family dog, never mind rid it of demons!

Also consider the symbol Long's team uses on the right here. Seems to encourage secularism right?
But on the very same site Long states his "theory" that exorcism rituals are being made too secular. This is a theory he is so proud of he puts a trade mark after printing it!

You can't trademark a theory you bloody idiot! 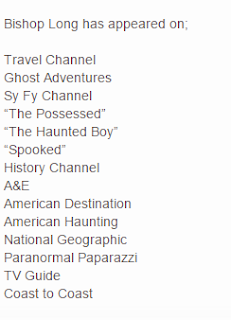 Add to these inconsistencies a charge of outright hypocrisy. At 37:00 minutes into the interviews he states that he went on Ghost Adventures to publicise the services his groups offers. "I just couldn't afford that kind of advertising" he states. He then goes on to rail about "attention seekers" on paranormal TV shows! According to his own profile on this website you've appeared on all of the following channels and shows.

Long states that this was to publicise endeavours that he does for free, but he blatantly solicits donations not for his Church, but for his personal ministry. 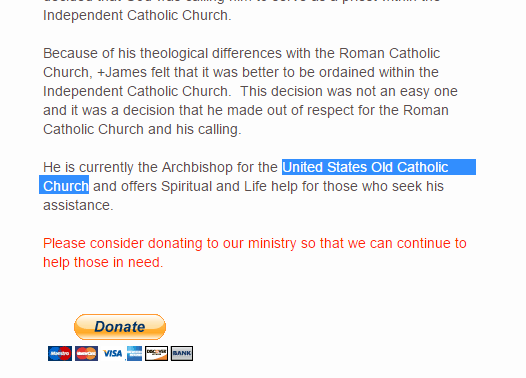 Also a course in Demonology at his ParaUniversity is anything but free! This is from man who explicitly states "I don't charge for anything." Sorry, that's an outright lie and to claim some moral superiority for doing everything for free when you know that you're charging $99 for your "expertise" is disgraceful. Long calls exorcists performing exorcisms via Skype "shysters" for charging for the service: I agree but how is he any better? 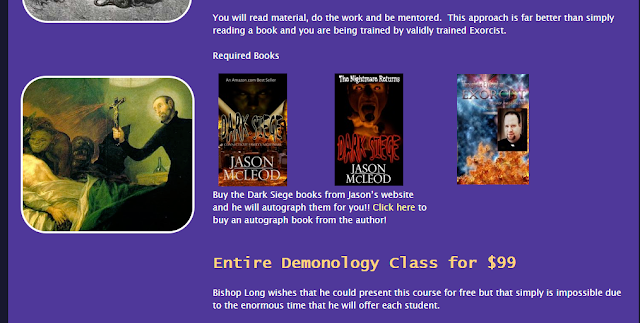 Also you'll notice that the required reading for this highly academic course are trashy shlock available from Amazon for $1.99! Here's a snippet you'll read from your first "textbook" as you embark on your "higher learning". Its highly complex so be prepared.

Taken from Dark Siege 1: A Connecticut Family's Nightmare.  Reprinted for purposes of criticism and review. 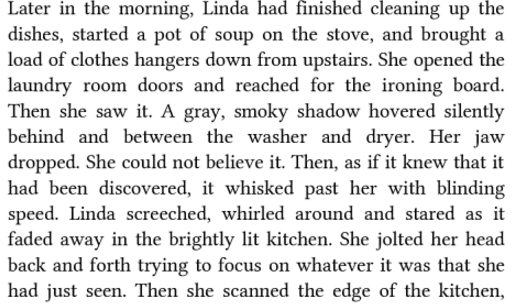 The book continues in this vain, like a poor horror novel that purports to be a "true story." How does this sample stack up with the course description offered by Long?

If you want to examine Long's motivation for his work as a demonologist listen to that interview I posted from about 1 hour 4. Long complains for twenty minutes about not earning enough money. About receiving only a "twenty dollar donation" or at one point "lousy ten dollar donation" for a job he did.

Charming. One presumes that he didn't embark on his calling for financial reward? He sure as hell gives that impression in that interview.

Inconsistencies, hypocrisy, outright lies, greed, bitterness, anger..... If I thought my house was occupied by a demon, I'd be tempted to stick with rather than call in Long. The demon isn't the only thing giving off a foul smell.

There's a lot around Long that stinks.

*One request... well suggestion. What can I say, I'm easily inundated.
Posted by Robert Lea at 14:31