Addressing the Latest "Evidence" in the "Dear David" Saga.

"Is this where we are now?"

That's the question that popped into my head when I first read about the "Dear David" saga unfolding on social media. I saw the events simply as the fabrication of an artist, New Yorker Adam Ellis, seeking to garner himself some attention. The story developed in a series of tweets, beginning on Monday 7th August, using tropes familiar to any horror fan including the encounter with the mysterious figure who fills in the back story of the "haunting" a feature of almost every modern paint by numbers horror film. 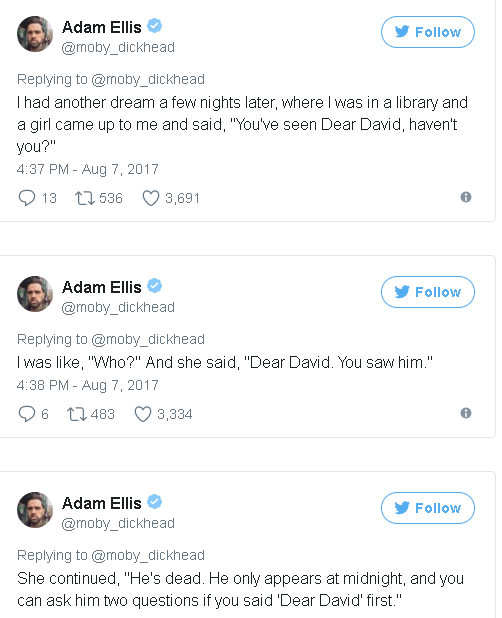 I'm not going to delve too deeply into the details of the story if you want more information you can visit Adam's Storify page (1). Whilst many people expressed opinions that Adam may truly believe his story and that he actually believes he is being haunted, even offering him advice on sleep paralysis (2), I believed from the start that Adam was a purposeful hoaxer who was revelling in the media attention. I don't place much stock in the credibility of a man who refers to himself as "moby_dickhead" on social media.  The problem was I couldn't really prove that and any attempt I make to address the situation would only serve to garner Ellis more attention. Adam is also clearly stating this "100% real" (4): 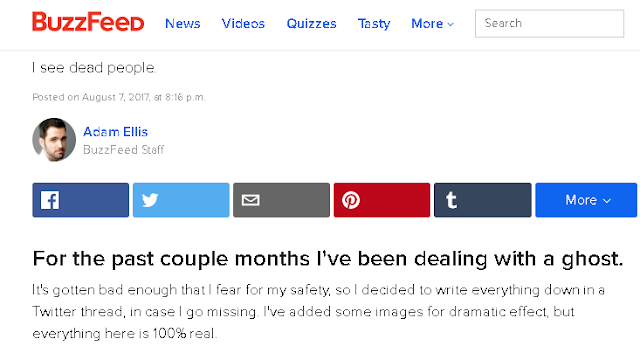 That changed with a story in today's tabloid press (3) as I believe with his latest video "evidence" Adam has over stepped the line of plausible believability and strayed into the realm of outright fakery and as such has exposed himself. The version of the story in the Sun focuses on three video sequences offered by Ellis, all of which were tweeted on August 29th. Ellis alleges that the clips were taken during the night and were caught by a camera and he was alerted to them by activation of a motion detector app. If Adam has installed a motion detector app I have to wonder how he's programmed it not to react the movement of his cats? 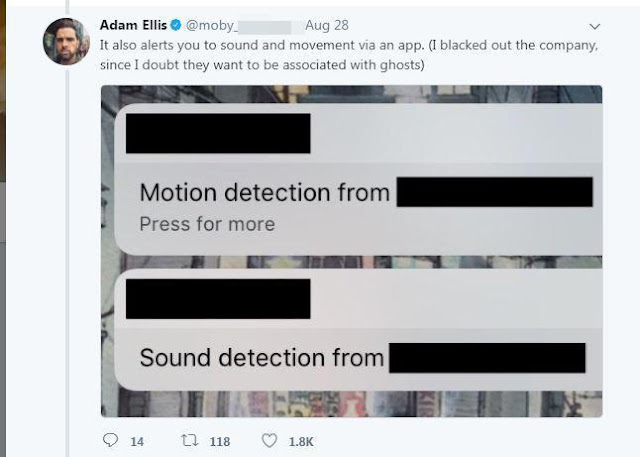 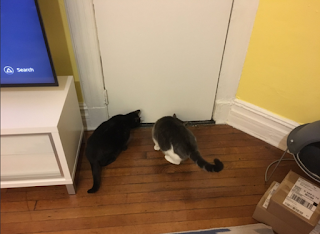 
So what sets the chair rocking?

Well, it could be our old friend fishing wire, but I'd say that it's much more likely that the rocking motion has been caused by pressure applied elsewhere on Adam's wooden floor or even the floor outside Adam's front door (left of the screen). Images from Adam's twitter feed show his well polished hard wooden floor. It would only take a slight pressure to cause enough buckling in the floor to cause a gentle rocking. 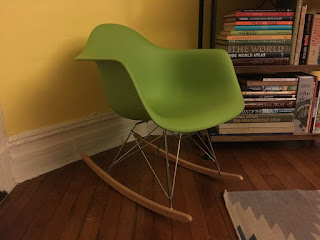 We also see from other images on Adam's twitter feed that his front door is right by a stairwell. Close enough that I suspect even someone climbing the stairs and passing the front door could set the rocking chair in gentle motion. 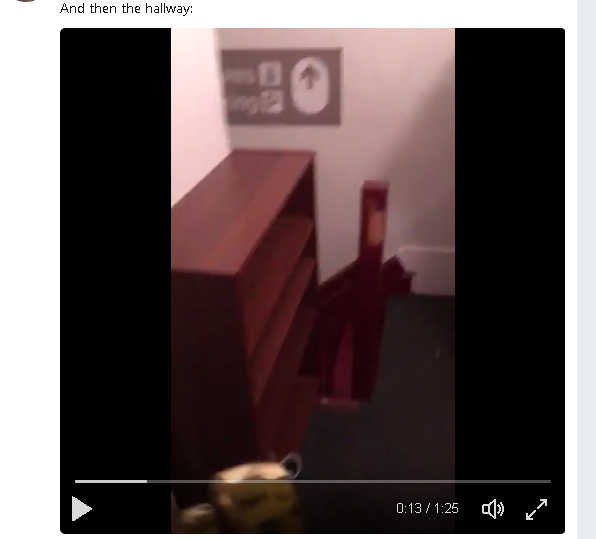 Other photos show that Adam has only just moved the rocking chair to the front door, which strikes me as not a normal location for the chair. It appears to me that the positioning of the chair will barely allow Adam to get his front door open so why place it there? 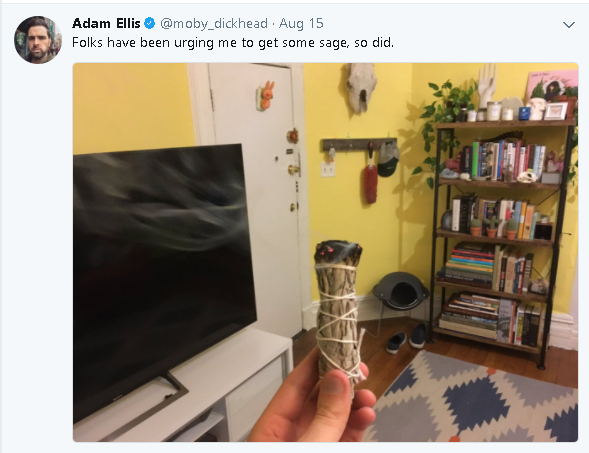 And the above photo brings us to the next video which shows a turtle shell falling from the wall above the bookcase in the image. Problem is the shell isn't in the above image either.

What causes the shell to fall? Could be practically anything based upon how Adam attached it to the wall. Frankly, it's likely not nailed to the wall as this would destroy the shell. 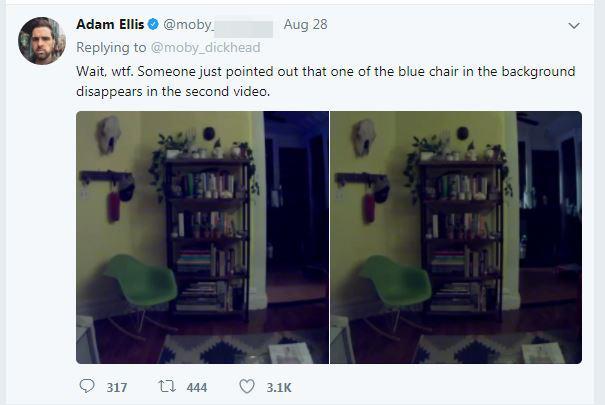 So this alleges to show a chair disappearing, it's very clear what it actually shows though.

This footage doesn't show a chair disappearing, it shows a blatant edit. It isn't just the blue chair that moves, various items are disturbed in the second room and most damningly the lighting conditions completely change! This clearly shows not just an edit, but the fact that this light migrates from one side of the room to another means it is not artificial light, it's natural light meaning that this footage was shot during the two different times of day. 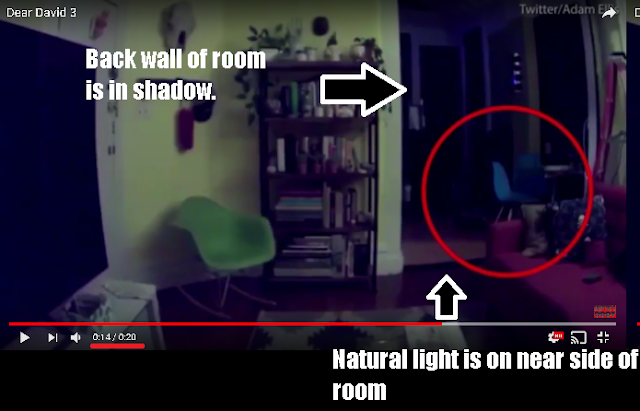 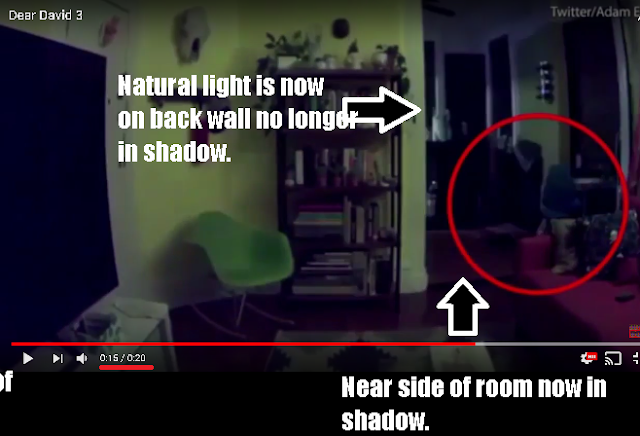 I'll give Adam this, he's got some balls to present this blatant error as another paranormal event when in fact what he's done is moved the chair, likely to reach the turtle shell to arrange it to fall! I think it shows us the timeline of events pretty clearly.

1. Adam films the chair rocking. The near side of the second room is lit, the far side in shadow. The chair is in place.

2. Adam ends this recording. After he shuts off the camera at some later point he moves that blue chair to stand on it to gimmick the turtle shell.

4. He puts the whole video edited together on twitter failing to notice his blatant mistakes. Here's the video as Adam originally put it up on his Twitter feed:

5. When it's pointed out to him he bluffs the mysterious chair disappearance as further "evidence".

I think whoever wrote the Sun article noticed this too and purposefully edited that part out as it's a smoking gun that allows anyone to piece this mess together. Thus they presented the video as two separate pieces of footage.

(4) https://www.buzzfeed.com/adamellis/my-apartment-is-being-haunted-by-the-ghost-of-a-dead-child?utm_term=.bkV8OnMeA#.tddXl6QpZ
Posted by Robert Lea at 16:44