The first thing that I think I should be clear about is that I don't believe merely platforming a rapist makes a person a rape apologist, nor does it constitute in itself rape apology.

That is not my argument.

Secondly, despite the fact that I believe that the things Steve Mcrae said in the fallout around his stream with Earl David Worden on July 6th can be interpreted as 'rape apologetics' I do not believe that this makes him a rape apologist for a few reasons.

In a 2013 article (1), author Sarah Beaulieu urges that we shouldn't be too hasty to call a person a rape apologist. She argues that the title gets under her skin because most people don’t apologize on behalf of rapists and most people don’t think that rape is actually okay.


I do not think that Steve McRae thinks rape is OK. In fact, I've heard several statements from him that show he definitely doesn't think that. That said, I do believe that the things that Steve said in the aftermath of the aforementioned stream fall into the category of rape apology.

Rationalwiki says: "Rape apology is an umbrella term for any arguments suggesting that rape is infrequent, misreported, over-reported, not that big a deal, or excusable in some circumstances."

Debra Russell argues in a 2017 article that rape apologetics is anything that seeks to rationalise rape or to make light of it, she also includes efforts to suggest rape is misinterpreted--adding, another common trait of rape apologetics is the suggestion that the sex in question was actually consensual (4).

The Good Lad Institute in the UK (11) is an organisation that helps young men understand gender issues and narratives. Daniel the managing director gave me key points that are common in such narratives to help define rape apologetics.


Several of  Steve McRae's comments suggest that the rape that Earl David Worden committed was misreported or 'not that big a deal' or worst, not rape at all. This is rape apologetics.

On 7th July on Twitter, McRae suggests that a lack of Romeo and Juliet laws have 'fucked many good people' (a). In another thread, McRae gives the ages of Worden and his victim as 21 & 17 respectively. Both comments support the idea that Worden's is a statutory rape case-- which it explicitly is not (b). They were both 24 at the time of the assault.

As this comes in direct response to people discussing Worden's conviction, it is not uncharitable to assume he is implying this all relates to Worden's case.

As 'Romeo and Juliet' laws apply to consensual sex--Steve raising them in regards to Worden's conviction suggests the act was consensual. This is a clear misrepresentation of Worden's crime. Also, as 17 is above the age of consent in Texas anyway, R&J laws could never have applied to this case even were those ages correct.

In a September 6th conversation with Reds, Steve explicitly states that he believes that the victim consented to sex (x) in direct contradiction to her statement and bizarre in light of the fact that the victim did not point to Worden. He was made known to police after they appealed for information and six-week manhunt was conducted.

By stating that he believes Worden's story, Steve is also saying that he does not believe the testimony of the victim that convicted this violent rapist, as both accounts cannot be simultaneously true. Nor does he accept the evidence that convicted the man.

One of the most common and insidious forms of rape apologetics is the implication or statement that a victim in a successful rape conviction is not telling the truth, either by deception or in error. This enforces the narrative that false allegations of rape are more widespread than they actually are.

To see how this is damaging, in a 2019 paper (5a) discussing the change in rape narratives over time author Tanya Serisier points out that despite high profile rape cases and the #MeToo movement encouraging victims of sexual assault to come forward, the full stigma has not lifted. Practices of doubting and judging a women's testimony have not ceased, she argues, adding that victims that do speak out are seen as "tainted".

This is why statements such as Steve's are harmful, regardless of intent.

Another element of that earlier definition was the downplaying and making light. At several points in the discussion of the crime Worden committed, Mcrae refers to the topic as 'drama' (c). This intrinsically makes light of the information being brought forward--implying that it is somehow petty and beneath discussion.

Alledging that this information is only the concern of trolls on a 'witch hunt'-- again on 6th July (c)--simply compounds this.

In addition to this Mcrae attempts to stymie the entire discussion (g). By deleting links to Worden's history, thus actively protecting the reputation of a convicted rapist--defending him.

In a 2018 paper entitled 'Denying rape culture: A response to Luke Gittos' (5) J Stiebert makes the case that a selective view of the evidence is a major issue in the perpetuation of rape culture--one of the main issues with rape apologetics.

Steve does that every time he states that he 'knows the inside details' (g) or previously unreleased facts or has the records about the case whilst ignoring the court documents, the evidence that convicted Worden and witness' testimony yet again.

With regards to the idea that false rape complaints are a problem, a 2009 study by Jo Lovitt and Liz Kelly (5b) looks at rape or sexual assault claims that are suspected or found to be false. They found that in the UK, Europe and the US false claims range between 4-6% of all cases-- falling in line with the rate of false claims for other crimes.

Yet, we seem to hear more statements about the credibility of rape victims than the victims of any other crime.

Steve also implies that in his 1986 court case, Worden is perhaps being framed or mistreated as a result of his police auditing activities--long before police auditing was a thing (f). Worden couldn't have been a police auditor in 85 or 86.

This again meets the criteria for rape apology by suggesting the system is somehow skewered against an accused rapist.

As a 2018 New Statesman article points out, bias against alleged rapists is unlikely to be a problem as such cases are notoriously difficult to see to completion. (6)

Downplaying Worden's crime once again, Steve points out that he didn't serve any jail time for the crime (d & e). This blatantly untrue.

Worden served 30 days and later 90 days in Harris County and received 10 years probation. He later violated the probation by carrying a firearm. This resulted in him serving five years in prison. According to US criminal law when a person breaks probation it is initial crime that they serve time for (7)

I also want to point out that during Worden's trial his representative asked the court to suppress information that Worden was a suspect in multiple sexual assault cases previous to his conviction--one such case collapsed purely as a result as a negative line-up identification (8).

A wealth of investigations in the past 35 years have exposed the severe flaws with the 'line-up' as a form of perpetrator identification (9). This case would have been unlikely to collapse before it reached court was it conducted today.

Worden also is currently awaiting trial for the alleged historical sexual assault of his children (10).

How does a man go through life racking up sexual assault accusations--especially from his own children? Is it all a conspiracy? Where is the evidence that exonerates him? Why did he never use it to appeal, instead of remaining on the sex offenders register for life?

In the September 6th hangout, Steve urges scepticism (y) but is he being sceptical about Worden's story? He is ignoring a preponderance of the evidence because he believes Worden is an "honourable person" (y).

If I've swayed your mind what does that say about Steve. Do we cancel him?

No, we should deal with the situation with humility. We should accept that Steve is not the first person to be convinced by a practised liar. Worden has had decades to rehearse his story and perfect his narrative and Steve is only human.

All my sources, including screencaps, are in the video description.

This is a false equivalence. People that had rape convictions overturned went through legal channels to have cases reopened and re-examined. Worden has not done this. He accepted his conviction. Whilst maintaining his innocence he remains a convicted rapist. Also, these people considered the evidence in the cases, often taking into account new evidence that has come to light.

Motivation--They don't just accept the story and use that as the basis of their argument--they take into account--new evidence, bad legal advice (such as the Brian Blake case when he was advised to plead guilty to minimise his sentence from 40 years in prison, if found guilty), reasons for a mistrial.

Intent--they intend to have convictions overturned and names cleared. They aren't just squabbling on the internet. Worden has made no attempt to clear his name.

Application--arguing on the internet is not equatable to forming a legal argument and instructing lawyers to build a case.

If Reds were to agree with my definition, would he also agree that what Steve said qualifies as rape apologetics? If so, why doesn't he accept my definition?

The Non-Sequitur show--Steve claims his reference to a 17 & 21-year-old was a separate case--why bring it up as a response to Worden's conviction?  Talk about a non-seq!


You'll have to ask Steve/Worden-- As Reds has been issuing challenges on the internet on Steve's behalf and claiming to represent his side of the story, it isn't unfair to ask him these questions.


Also, would Reds say it is fair that if only Steve can answer questions about additional evidence and this isn't available to us, should we not disregard it? This leaves us with no recourse than to rely on the court's evidence. The evidence that convicted Worden.


Texas definition of rape-- not the same as the rest of the US. 'Rape' only applies to those of non-legal age. Anything else is sexual assault. What Worden did meets the definition of rape almost everywhere else.

Making light of a situation-- More than just joking about something: "to joke about something or treat it as not being very serious, especially when it is important." Longmans dictionary (12)


Steve says he believes the sex was consensual

(a) Getting the ages of Worden and his victim wrong

(b) No Steve, Romeo and Juliet laws still wouldn't save Worden

(d) Protesting Innocence and no jail time for rape 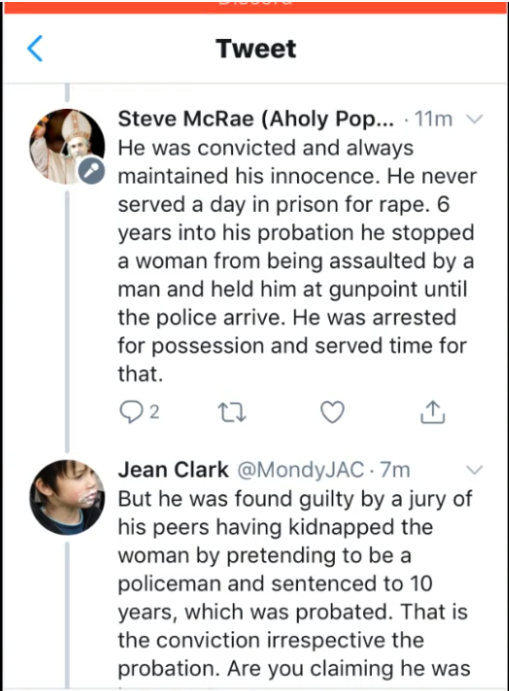 (e) Steve believes Worden--thus must believe that the victim is lying.

(f) The system is corrupt and the time-travelling police auditor hunters strike! 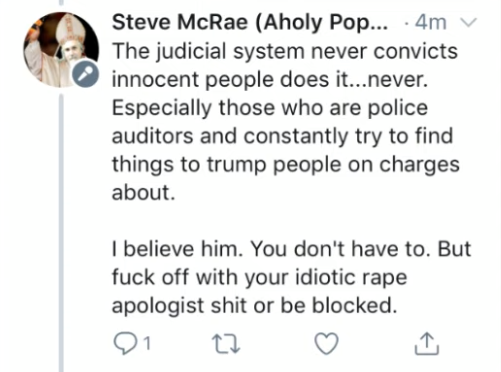 (g) Shutting down the discussion is defending Worden 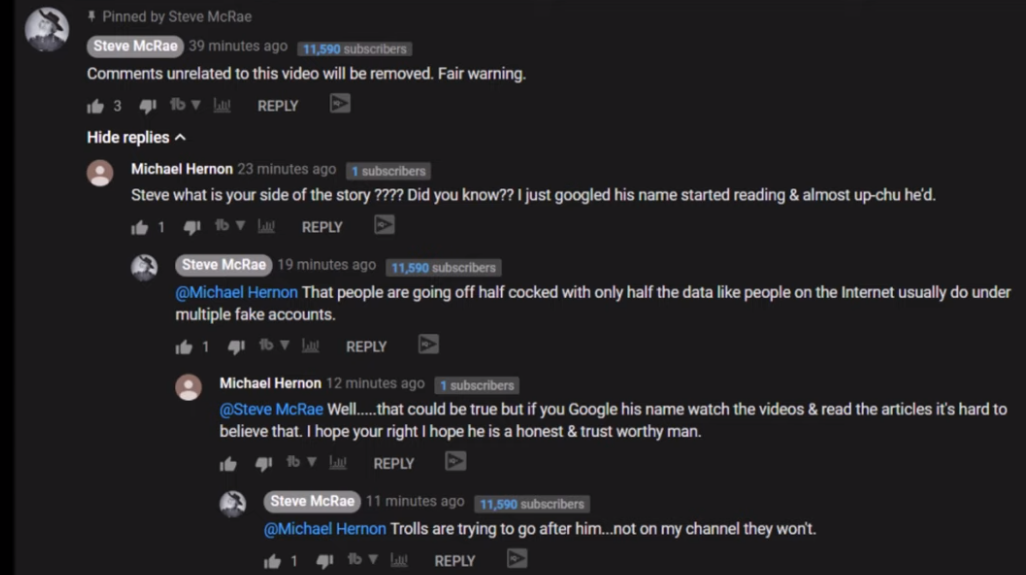