A word of advice to paranormal investigators.

Once again I find myself looking into the behaviours and claims of a paranormal investigator and find a web of false claims of scientific credibility. Delving further I find the actions of a person so egotistical that they believe they are able to offer a client mental health advice and see no issue in telling a person with such a condition they are being attacked by a demon. 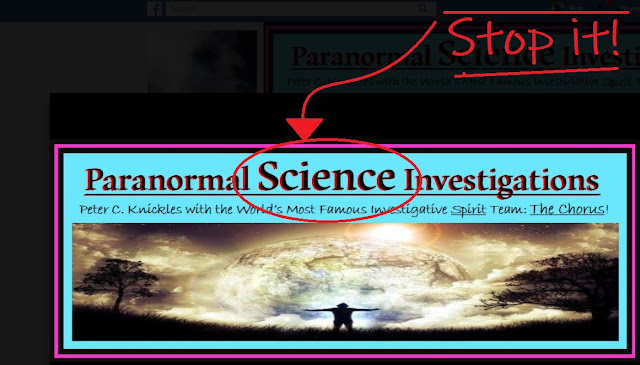 If you're a paranormal investigator who thinks that adding the word 'science' or 'scientist' to their own title or investigation group...


More importantly, if you believe you have the expertise to deal with a person with mental health issues...


You may think it makes you sound cool and authoritative to claim to be a scientist, it may for a while. But it won't take long for some fucking arsehole, like me, to come along and start asking you awkward questions. It will happen. And if you block and ban me, someone else will come along. Finally, one of the big guys' will spot you. Someone with an audience. And your reputation will be shot.

Either that or your lies ill spiral out of control. You'll start off claiming to have vague 'science qualifications' and then you'll start to create a narrative. You'll get more specific and you'll create a lie that you can't handle anymore. Let's face it if you threw 'science' into your title, you're a fantasy-prone person. And people like this get carried away.

Either thing happens and you will lose all the credibility you ever stole, yes stole. Not just that, but what you did will hang around your neck like an albatross. People will discover you, then they'll quickly discover your past and drop you like an apple with a maggot in it.

Ask paranormal fuck-boy, David M Roundtree. In 2010 Roundtree was writing books about 'paranormal technology'. In 2014 he was a bit-part player in a TV show, Ghost Stalkers. Sure, it wasn't a runaway hit, but he was respected and did the rounds on talk-shows and podcasts. Could have even found himself on a new TV show. There's plenty of them around. 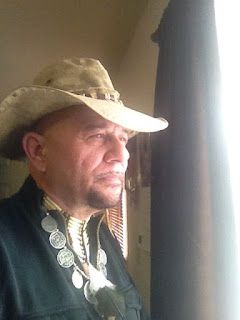 The trend continues down the first page of results. More Blue Falcons posts, more of my posts, a petition to stop him from appearing on paranormal programming in the future (3). There are only three 'pro-Roundtree' links on that first page, his Twitter account, his blog site and his Amazon book page (4, why not go and leave a review guys?).

He's a pariah of his own making. He started a lie and couldn't stop lying.

Of course, I could be wrong.

A chap on Facebook, PC Knickles, certainly thinks I am.

Meet PC Knickles. Not a scientist. Not a mental health professional.


PC, you will be unsurprised to learn, describes himself as a 'scientist' on social media. A paranormal scientist no less. He does this in a post in which he solicits followers for 'cases' for him to handle.

PC also operates a paranormal investigation group called 'Paranormal Science Investigations'. All of which strongly implies that PC has some form of scientific qualification. So I and several others including Alex Matsuto of the Association of Paranormal Studies asked.

Now, I'm sure that the drive of the post thus far has given you a good indication of the answer I received. But PC was remarkably evasive with his response. First, he directed me to his group page. When I put to him that there is no mention of his qualifications there, he directed me to his personal page. I found there is no mention of any qualifications there either. 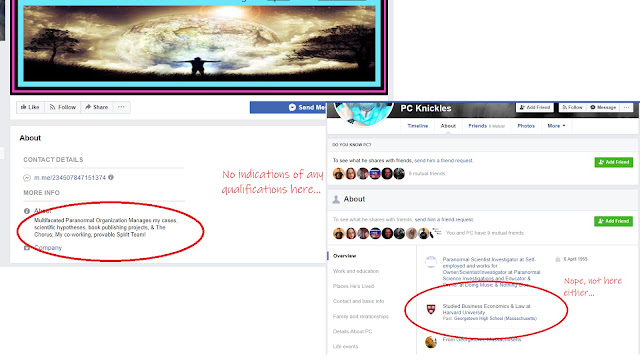 Remember, PC directly sent me here. I can only assume that he didn't believe I'd investigate further. When I put it to PC that none of his pages have any reference to science qualifications, he had quite an extraordinary response. PC told me that he believes he is fine to call himself a scientist as the 'Google definition' of scientists is "a person who is studying or has expert knowledge of one or more of the natural or physical sciences.". That is actually the definition from the Oxford English Dictionary (5).

I don't disagree with the definition particularly, the question is regarding where "expert knowledge" actually comes from. It also ignores what other people believe when you tell them that you are 'a scientist'. I don't believe that it is unreasonable for those people to expect you to have some academic qualifications.

PC believes that this image entitles him to call himself a scientist? He claims it shows the 'pink energy' of a soul escaping a body at the point of death. I think it's someone's finger over part of a camera lens.

Whatever the case. That image in no way entitles PC to refer to himself as a scientist. He hasn't done the years of study that entitles one to claim the credibility that comes with that title. The fact that he thinks he does imply to me he is extremely egotistical.

It also implies to me that he is misleading his 'clients'.  Perhaps dangerously so.

And let's face it. If PC really thought that these things entitled him to claim that he is a scientist, he wouldn't have sent me on a wild goose chase looking for his qualifications. He'd have just fucking said it straight away.
Worse still, I found some indication that PC isn't being exactly honest about the qualifications he does hold. His Facebook profile indicates that he studied 'Business Economics' and 'Law' at Havard. His Linkedin profile states that he studied 'Business' and 'music' and was only at Havard for a year. 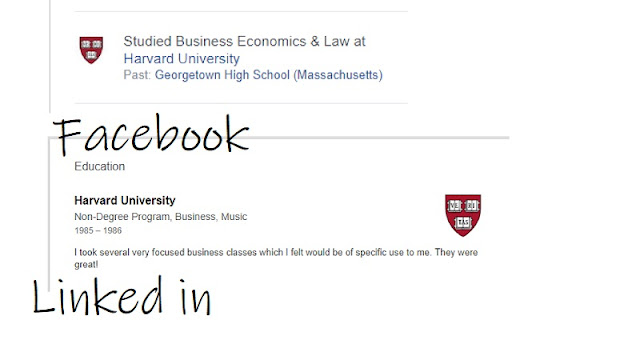 Unfortunately, my concerns with PC and his dealings with clients don't end there. In the process of conducting this discussion with PC, I came across one of his 'clients' and found that he is engaged in extremely concerning practices.

The client, appeared on the thread to remonstrate with PC regarding the use of the footage he had shared. In addition to that, they claim that PC was not the lead investigator on the case as he indicated he was. 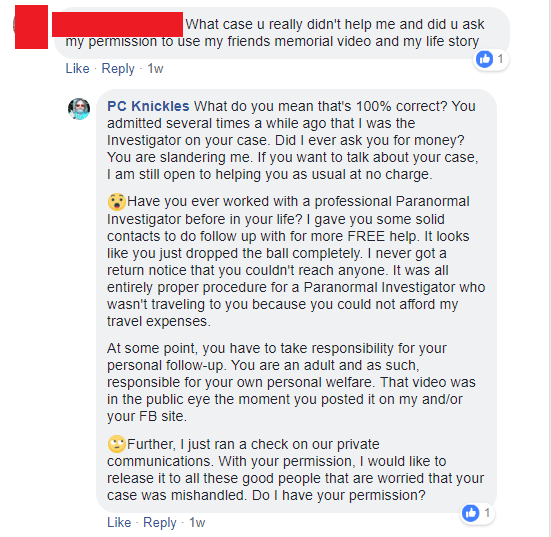 I'm not going to touch on the dispute with regards to who owns the footage PC used, what I will comment on is the disgusting way that PC talks to his client, plus the fact that he makes it very clear that he will only 'help' potential clients if they can pay his travelling expenses.

This may sound a bit unprofessional, but during the conversation, it becomes apparent that the client, in this case, has mental health issues and a severe disability. If PC was even remotely ethical he would have never taken his case. His client should be receiving professional help. Help PC isn't qualified to dispense.

Of course, that isn't going to stop PC from offering medical advice as seen below. 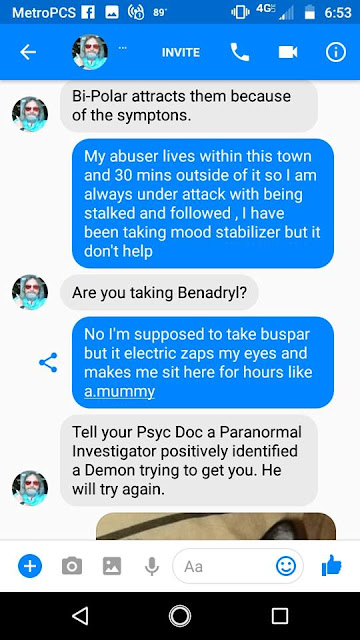 As well as suggesting that a qualified medical practitioner should listen to a paranormal investigator, he asks if his client is receiving 'Benadryl' for her mental health condition. Benadryl is an antihistamine. It is used for the treatment of allergies and hayfever.

The man does not have fucking clue. He doesn't have the qualifications he is strongly implying he does and he is taking cases that involve people with mental health issues. People he is not qualified to help.

PC. I hope you read this. I hope that other paranormal investigators read it. Claiming to have expertise that you know you do not have is bad enough. Getting involved with people who you know need care and attention from professionals is abhorrent.

(5) https://en.oxforddictionaries.com/definition/scientist
Posted by Robert Lea at 23:53