Ghost hunter claims every house in the UK 'could be' haunted: Lots of ghosts. Not much evidence.

As a long-time follower of paranormal investigators and their interactions with sceptics, there are some phrases and expressions that stick in my mind and can be wheeled out to describe a variety of stories and events. For example, when reading the claims of a ghost hunter printed in a British paper, I think back to Joe Nickell's description of Ed Warren on a classic episode of the Sally Jesse Raphael Show in the 1990's.


"Warren never entered a house that he didn't think was haunted" 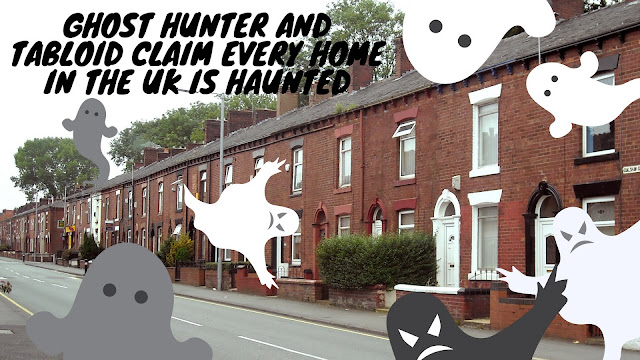 Those words echoed through my head as I read a story published in the UK's Daily Star newspaper on the 10th August entitled 'It’s possible EVERY British household is haunted’ Terrifying warning by expert' (1). If you've any doubt what the motivation behind the report is then the strapline 'A GHOST hunter has claimed every British household could be haunted by evil spirits.' should give you some indication.

The ghost hunter (or 'GHOST hunter' according to the Star) in question, Barri Ghai, has been the focus of a vast amount of articles in the Star over the past week. Almost every day he has appeared discussing some very 'clickbaity' aspect of the paranormal.

This has included discussing Elvis' ghost on 6th August and the 'irrefutable proof' that a ghost touched former glamour model, Katie Price's arm on 4th August. All of this attention from the Star is linked to Ghai's upcoming ghost-hunting show set to air on UK digital channel Really, the same channel that airs ailing ghost investigation farce 'Most Haunted.'

The article in itself is stunningly lightweight, Ghai offers no real insight, a theme that runs through all of his articles for the Star. His main point seems to be that Britain's homes should be particularly vulnerable to hauntings because of their 'history'. "It's not just the home," Ghai says "it's the land around us." A particularly nonsensical claim considering that all areas have a history, what Ghai seems to mean is a history that he is aware of. Does he think that land in other countries didn't have people and animals dying on them throughout history?

He has a strangely 'Anglo-centric' view of history if he hasn't considered this.

It's pretty obvious that the series of articles featuring Ghai is paid promotion to support to the show 'Help! My House is Haunted." making them cheap and cynical. Neither the production company behind the show, Really or the Star care if these articles are lightweight junk. Not even if it's lightweight junk that misleads or causes fear and anxiety.

I view the article in conjunction with the recent story that went viral by ghost hunter Gary Parsons, claiming that the heatwaves experienced in the UK are responsible for a rise in ghost sightings (2). Neither article has the slightest bit of evidence behind them and both seem to offer an excuse for the tabloid press to print further ghostly nonsense.

But there is a worrying trend here. In an attempt by these ghost hunters to make themselves relevant they are exposing potential sensitive and scared audience to the idea that ghosts exist, but they are everywhere.

There isn't a lick of evidence to support these claims, of course. We're being told that Ghai, Parsons and others cited in the articles are 'experts' but were are the telltale signs of expertise? Here's a striking example that the addition of an implied expertise done simply to lend credence to nonsense. It's an argument from authority.

Ok. So he's a 'technical expert'. Surely that means we can expect him to talk about some technology, maybe attempt to offer an explanation as to why high temperatures may be leading to an increase in ghost sightings from a physical standpoint?

Well no. After briefly mentioning the 'Huff WonderBox' (yes, this 'technical expert' couldn't identify a broken radio when he purchased it for hundreds of dollars), Bryant offers this gem:


"On a recent house investigation, my body was taken over by a dead priest and refused to leave until it was ordered to leave by my colleague Amanda Oriana."

Yeah. Dead priests can be stubborn, sounds like you got lucky if this one left your body after just being told to do so.

Not very technical though is it?

I'll be honest when I saw the headlines of this series of articles I was excited. I haven't talked about the supernatural or debunked any paranormal claims for some time. I wanted to, for the summer at least, dip my toes back in. Maybe do a few old 'Skeptic's Boot' style articles. But what I instead found was a commentary on a major reason I haven't been touching this stuff of late.

There's really nothing here to debunk.

I really feel like we've come full-circle with the claims of ghost hunters and the attitude the tabloid press has towards them. There's no need for 'evidence'to build the claims around anymore. Journalists are simply looking for a paranormal-themed story to write that centres around a possible 'news hook'.

People are reading articles about the heatwave the UK experienced in June and July, so journos go out and find an 'expert' willing to sell them bullshit centred around that. Readers are always interested in celebrity stories, let's centre a ghost story around that.

Nickell's comment about Ed warren that I featured at the head of this post has come to horrific fruition. There is now a huge swathe of ghost hunters who are unable to walk into a home that they don't think is haunted. In Ghai's case, he's quite happy to tell you that your house is haunted without ever stepping foot in the same street! And there are tabloid media more than willing to serve that up to their customers.

The problem that this presents to sceptics is this, there's that old adage "What can be claimed without evidence, can be dismissed without evidence" but this is a double-edged sword. Sure, on one hand, it means we can increasingly dismiss the claims of ghost hunters without a second thought. But it also means that we are deprived of the opportunity to change the minds of believers and fence-sitters.

That's concerning. Especially as many sceptics and debunkers of paranormal claims were once believers. They had their mind swayed, in many cases, by coming across the work of a previous generation of sceptics, by convincing well-laid out auguments.

How do we build an argument on nothing substantive? Other than pointing out how unsubstantive it is?

(2) https://www.dailystar.co.uk/news/weird-news/721496/UK-heatwave-weather-forecast-ghost-news-paranormal-investigators
Posted by Robert Lea at 12:21